"The Revolution Will Not Be Televised" (or will it?) Nine Deuce and Company are Playing With a Full Deck in This Post: on Media, Male Supremacy, and What To Do about Each 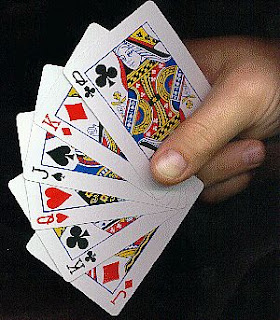 With permission, this is a cross post dealt by Nine Deuce over at Rage Against the Man-chine. I LOVE her writing. I love it, love it, love it! It kicks patriarchal ASS. *Here's* the link back to her original post, on her blog.

Justin sent me a link to a recent (OK, not that recent) article about Kathryn Bigelow, the first female recipient of the Academy Award for Best Director for The Hurt Locker (who also directed one of the greatest movies ever made, Point Break). The article, written by Barbara Kellerman of the Harvard Kennedy School, while it did make me snort a few times, made me come to an important realization: it’s more important for women to concentrate on gaining control of the entertainment industry than politics.

But first, let’s get back to what made me snort. Kellerman, apparently a sex discrimination and objectification apologist, claims that it’s:


… not that Hollywood dislikes women. It does not: films and females have gone together since the inception of the movie business. It’s just that even now, a decade into the 21st century, Hollywood wants women in front of the camera rather than behind it.

See? It’s all good, y’all. Hollywood may not value women’s abilities, intelligence, or artistic talent, but it likes looking at fuckable ones. Why complain that there aren’t enough female Best Boys when women dominate the Interchangeable Sex Object market? Come on, now. How can Kellerman make the claim that Hollywood doesn’t dislike women when “it” only allows them to play the limited roles it assigns them, when it requires that they perpetuate its own warped ideas about womanity (coinage!) if they want to participate at all, when it bars them from occupying any positions within the industry hierarchy from which they might gain the power to create entertainment that depicts women as human beings rather than formulaic rehashes of the temptress, girl next door, damsel in distress, or shrew archetypes? Sounds to me like Hollywood dislikes women and wants to make sure the rest of us do, too.

And then there’s this humdinger:


[I]t would be disingenuous not to point out [Bigelow's] decades-long relationship to James Cameron, the guru behind The Hurt Locker’s most obvious competitor, Avatar, and one of Hollywood’s all time heavyweights.

The fact that they were married for a couple of years a couple of decades ago has no apparent bearing on Bigelow’s emergence as a star director in her own right. But the fact that for years Cameron has been her mentor, as well as her apparently unwavering collaborator and champion, does. It’s anyone guess whether Bigelow could have made it so far on her own, notwithstanding her talent and drive.

Oh, SNAP! So, even when a woman finally does wrest a begrudging nod from the 90028 phallocrats, we have to give a dude credit for it, “notwithstanding her talent and drive” (whatever the fuck that means)? I wonder whether anyone, when discussing the garbage James Cameron has strewn across the cultural landscape, has ever bothered to pontificate on the various personal relationships that might have propelled Cameron to his current position atop the entertainment shit heap. Probably not, since when men make use of personal connections to get ahead, they’re just savvy, resourceful go-getters. But when a woman (or anyone who isn’t a white dude) does anything other than take some kind of melodramatic Russel Crowe-esque stand against accepting help from anyone in their struggle to measure up to standards set and enforced by these nepotistic networkers (I’m practicing my alliterations in the hopes that TruTV will hire me to narrate some “shit gone awry” clip show), everyone assumes that they — because naturally, being female, they lack any true talent or skill — must have hosed their way up the ol’ ladder of success.

Not only does Hollywood dislike women, but I suspect that Kellerman, though possibly unbeknownst to herself, might not be that big of a fan either.

Which brings me to the actual point: women need to get control of the entertainment industry (and its controlling boyfriend, the advertising industry) or else, and it ought to be our foremost goal, possibly even taking precedence over political representation. Whether we are pumped about it or not, the entertainment and advertising industries make up the bulk of our culture, and culture, though it is an excuse for nothing, does appear to underlie everything. The entertainment industry, news media included, shapes and directs public opinion on nearly everything, including and especially gender roles. We’re surrounded by the entertainment industry’s influence nearly every second we’re awake, and it probably plays a larger accumulative role in forming our ideas of self, other, and society than any other influence. If women were to gain control over at least half of that industry and its output, and if that control were to result in kinder, more sympathetic, more realistic, or just plain less hateful representations of women, the effect on our culture would be striking.

Equal representation in politics would be great, but the only way that will happen without a massive reduction in societal misogyny would be through the use of a quota system. Whatever your views on affirmative action or our purportedly individualistic and meritocratic political system, that isn’t likely and would probably lead to the kind of social backlash I’m not interested in learning the details of. It may very well be that the only way to ensure women’s interests are represented in politics is to create the kind of culture in which women’s views and political participation are seen as desirable and necessary to the functioning of society, and the only force in the world with the power and reach to propel us toward that reality is the popular media. Blogs ain’t doing the job. The corporate entertainment industry shut down the independent media efflorescence of the early to mid 90s. No one cares what the local booger punk band thinks. A popular entertainment media takeover by women is the only solution.

But then we’d have to rely on the kinds of women who give a shit about getting ahead in Hollywood to represent our interests to the public, you say? Yes, it’s a lesser of two evils situation, to be sure, but at least women can identify with women as human beings like themselves and would be less likely to make yet another horror movie in which young attractive women are tortured to death for the titillation of teenage misogynists or yet another boob comedy. Without looking it up, I can guarantee you a woman didn’t write or direct American Pie. Sure, I’d like to see something a little more radical than a gradual, piecemeal amelioration of women’s systemic oppression, but until I write my treatise on how to create an anarcho-communist utopia in which beer is blue and tastes like flowers and Cadbury Creme Eggs are sold year-round by peaceable means, I’ll have to stick to offering my thoughts on how to change things from within the cruel system in which beer tastes like beer and I ate my last Creme Egg last night. For now, I’ll take what I can get, and this seems possible. Just think, with a popular media that portrayed women as human beings rather than either syrupy, kissy-faced angels or conniving whores, maybe even Barbara Kellerman would be able to measure women and men by the same standard and either give women credit for their achievements without disclaimers about the personal advantages they enjoyed, or call attention to the far more numerous social, economic, political, and personal advantages most men enjoy.


Filed under Corrupting the Children, Girls Are Pink, Boys Are Blue, I Suppose I Have to Talk about Politics Now, Sociopathic Marketing, The Misogyny Show