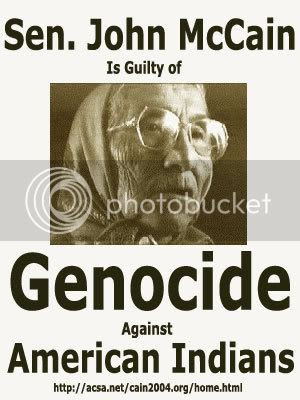 I used this image once before in a post about John McCain's genocidal policies, and it is needed again, to help make visually clear something that is now statistically super clear: THE TEA PARTY MEMBERS, disproportionately and demographically, are THE MOST ENFRANCHISED CITIZENS OF THE U.S.A. They are the least marginalised and the most wealthy. They comprise the least oppressed and the most in charge of the police power, conglomerate corporations, media instituions, and all policies that support and maintain genocidal practices against Indigenous Americans.

The Tea Party's Ohio Leader has spoken about wanting to kill the "Sp*cks" and he wasn't kidding. There was no "LOL" after his Tweet.

Supporting The Tea Party means supporting genocide, homophobia and discrimination against lesbians and gay men, domination of women by men, and virulent and violent racism.

It is a classic shell game move in the history of the U.S.A. to make , the most privileged people, misusing media, are appearing to be the most disenfranchised and marginalised.

They're Mad As Hell and They're Not Going to Stand for Losing Any Ruling Power!!!

Straight white wealthy men are in charge of this country and always have been, regardless of the race of our current president. Sure, the Republicans want their Houses and Presidency back. And they are some pissed they lost what they did in the last presidential election due to their obvious incompetence and obstructionism by THEM. It is WEALTHY WHITE MEN WHO WERE AND REMAIN IN CHARGE OF ALL THE CORRUPTION ON WALL STREET. It is WEALTHY WHITE MEN who have demonstrated inglorious dastardly callousness to the majority of U.S. citizens.

DON'T BE FOOLED AGAIN. Another G.W. Bush or Senator McCain or Sarah Palin or Mitt Romney won't be doing anything for the majority of U.S. citizens, because they only care about wealthy whites, and that's the ONLY demographic they've EVER taken care of.

When even one of their posititons gets filled by a woman of any color, usually a white woman, and a man of color, in this case African American, you'll find protests come in many forms, from mobilisation of neo-Nazi and KKK groups to quasi-strange phenomena that the media portray as "disorganised", when there's nothing really disorganised going on. The folks on top want to be sure they remain on top. They can fight to keep their rights and entitlements in orderly ways, with single leaders, or in more populist ways, seemingly without leadership. The Tea Party is an example of the latter. But has all the support of the former. Those who are in leadership, those who are the most wealthy demographic in this nation: white older het men, are the face of this Tea Party, and before you sip a cup of it, if you're Black, Indigenous, Brown, Arab, Asian, a feminist, lesbian, gay, or poor, you may want to make sure there's nothing funny about the flavor. Please be clear: these folks mean for you to stay beneath them, with less power, with less access to resources like health care, with less money, with less ability to rise up because you're going to have to work until you are eighty years old, if you live that long without universal, preventative, community-based, federally funded health care.

See below for more on who these not so disenfranchised members of society REALLY are. What you can determine is that when people in power even THINK they are losing some control of the rest of us, they will get mad as hell and they're not going to take it any more. They've never been not in control, so we can't really say "any more". They're not going to allow it to happen AT ALL.

Several polls are now out, assessing the demographics of the Tea Party Movement that largely agree the majority of its members are Republican, largely white, above the mean in age and income and voted for John McCain.

So do Tea Party people reflect the average American as they represent themselves? Not usually if you are a middle-aged woman of Hispanic background, an African-American male or a union member in New England just scraping by, according to the polls. A conservative blogger examined analysis of Tea Party members, citing CNN statistics declaring they are predominantly male, more college educated and higher earners than the general population at large, but not necessarily older or just from the South. A progressive blogger on ThinkProgress looked at the CNN statistics and relayed the same information as the conservative fellow, stating the following:

Bloomberg gives a bit more detail in its more current analysis and observes more than 90 percent of Tea Party backers say the U.S. is moving more toward socialism than capitalism, while 70% want more government involvement in job creation. In other words, they don't want the government interfering except in certain designated areas, as they also were found by majorities to want Social Security to remain under government control and didn't see the Veterans Administration as socialism. A poll is cited by Bloomberg to obtain the results noted, and is the most current with the article by Bloomberg just four days ago. The poll not only presents the results but cites its margin of error and the details of that poll. The poll of 1,002 U.S. adults was conducted March 19-22 by Selzer & Co. of Des Moines, Iowa. The results had a margin of error of plus or minus 3.1 percentage points. What Bloomberg observes from the poll is this: "Tea Party supporters are likely to be older, white and male. Forty percent are age 55 and over, compared with 32 percent of all poll respondents; just 22 percent are under the age of 35, 79 percent are white, and 61 percent are men. Many are also Christian fundamentalists, with 44 percent identifying themselves as “born-again,” compared with 33 percent of all respondents." So if you're not an older, white male, Republican, with money and voted for Obama, you're likely not helping bag the tea or preparing to cast it overboard.
Posted by Julian Real at 3:25 AM