To Honor Mary Daly; thoughts for this day 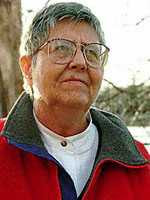 [photograph of Mary Daly is from here]

I hope more people read her work and study what she says about patriarchy and its values, dynamics, lies, and distortions. I hope people reading her work brings forth more activism, particularly from men, who come to understand that it is our job to challenge male supremacy and men's domination of women. I hope it encourages men to not drain the energies of women and to support women having woman-only space.

Sexism really shows itself in white men's attitude towards "books" and what they are for. When I get to know a white man, they are usually class privileged or academically privileged and inevitably they will tell me about their favorite author or volume. I have yet to meet one white man whose favorite book is by a womanist or feminist of color. And I have yet to meet a man who has given any serious consideration to reading and comprehending Mary Daly's work, on any level: politically, philosophically, linguistically, as activism, as prose, as literature. While this doesn't at all surprise me, I am reminded of how many books by white men I was made to read when growing up who demonstrated no awareness at all of women as human beings existing not for men, but for themselves. You'd think men, being caring of women, would want to know what a woman's liberated mind is like.


The comments around the blogosphere about Mary's death and life are poignant and also troubling. Troubling because there is usually the need to say "I didn't completely agree with her on all things" or "I was never that kind of feminist" or to subtly or not so subtly put down her work as "incorrect" or "too extreme" while men's patriarchal extremity in writing has ever been similarly ostracised or treated as if it had a contagious illness: we liked her okay, but I never wanted to identify with her. I suspect this is, in part, due to her being a lesbian, not the femme kind, and not the fun-for-men kind. Her writing is wild and wonderful and great fun. But women who don't focus on and take care of men emotionally as they write will not be read by men. Whereas misogynist men's writings will always be required reading somewhere.

I noticed how the Mary Daly page on Amazon.com doesn't list more than two of her books, even though all are listed there, separately, or more or less together if you just search "Mary Daly". Maybe that can change, at least. Hey Amazon.com: how about collecting all of those titles and putting them on the Mary Daly page? Makes sense, huh?

I leave you with this, a short piece about Mary I found earlier today:


Sin a Smidge for Mary Daly

[please, please see the first comment below!!!! Boooo to Boston Blog, for ripping off work from THIS site, from which the following comes--at BOSTONIST.COM, http://bostonist.com/2010/01/05/sin_a_smidge_for_mary_daly.php]

Mary Daly, longtime Boston College professor and radical elemental feminist (post/Christian) theologian, passed away last weekend. Daly often criticized the “eight deadly sins of the fathers: processions, professions, possession, aggression, obsession, assimilation, elimination and fragmentation.” She was a vegetarian and animal rights activist as well. Her many books included classics like The Church and the Second Sex and Beyond God the Father , which questioned the male-centric nature of much religious belief. Several of her titles were published locally by Beacon Press .

Daly’s time at BC was not smooth sailing: the school tried to fire her early on after the publication of the controversial Second Sex , and a lawsuit eventually forced her retirement in 1999 after she refused to admit male students into some of her courses. The National Catholic Reporter has a nice obituary, which includes excerpts from a 1996 New Yorker article (subscription required) Daly wrote: The word ‘sin’ is derived from the Indo-European root ‘es-,’ meaning ‘to be.’ When I discovered this etymology, I intuitively understood that for a woman trapped in patriarchy, which is the religion of the entire planet, ‘to be’ in the fullest sense is ‘to sin.’ I urge you to sin…. But not against these itty-bitty religions, Christianity, Judaism, Islam, Hinduism, Buddhism—or their secular derivatives, Marxism, Maoism, Freudianism and Jungianism—which are all derivatives of the big religion of patriarchy. Sin against the infrastructure itself! Rest in peace, Mary.