WHO REALLY IS LETHALLY HATEFUL? 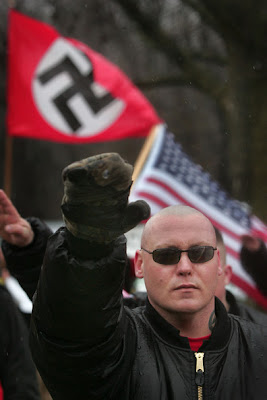 [image of U.S. neo-Nazi is from here,

where there's an article on such white men marching outside

Note: he's not a feminist.]

It is so abundantly clear that one among many silly "distraction tactics", one that unfortunately works among white male conservatives and liberals, is this boisterous, off-the-charts, histerical reaction to ANYONE who is fighting against enforced, mean-spirited, harmful, dangerous oppressive systems and the privileges people who oppress obtain by being in that oppressor group. You don't choose your privileges or entitlements--they are handed to you socially. But you do choose how to act them out, and against whom.

So if you think THAT FORM OF HATRED is even approximately the same as the hatred a few oppressed people carry around, you are WRONG. And you know it. So stop acting like such fools by jumping up and down with fists clenched and mouths spitting venom every time you find some quote by a woman that is furious at men, that may be hateful towards men, that has had enough of men. Because, boys, your unstopped behaviors brought her to that place. Nothing else did it. Your callousness to women's pain, you're ego-defensive posturing, your protection of your entitlements are what cause hate to manifest in those you harm. So if you don't like women hating you, STOP RAPE and organise against any law that privileges men over women. Interrupt and stop every misogynist act you see happening near you. Stop calling women misogynistic names. Stop being racist jerks. Stop patriarchy from functioning. And maybe, just maybe, you'll see that hate among a few of those you oppress begin to go away. But you've got to do your part FIRST. Got it?

Because whatever negative feelings an oppressed person has for their oppressor, it is borne of being mistreated, of being hurt systematically, of being invisibilised as full human beings by oppressive systems designed to manifest hate in the oppressor, and fear in the oppressed.

So stop focusing on a few hateful comments, or comments you take to be hateful and pay attention to WHY people feel the way they do, as if they were actual human beings, as human as you. As caring as you. As vulnerable as you. As sensitive as you.

Because--newsflash--those of us who fight for justice and human rights and liberation for the oppressed are not the haters of the world. We are the lovers.

The haters, more often called white male liberals, or white male conservatives are the passive and active supporters of hateful systems of subordination and cruelty: male supremacy, white supremacy, heterosexism, globalisation, capitalism; those who pollute the Earth on massive scales, such as those who set unlawful policies and practices for mega-corporations, while also exploiting labor across the globe--those powerful people are the haters. Killing forests for profit is hateful. Allowing thousands of animals to go extinct is hateful. If the bear bites back, you don't get to use that as the reason bears shouldn't be saved, or to call a bear the same level of hater as the white man who killed it. You either actively care or you don't, about the welfare and well-being of the planet, the non-human animals, the boys and men of color, and the girls and women of all colors. If one white woman yells at you in ways that you don't understand, that doesn't mean that you, if white, stop caring about the impact of male supremacy on women, right? Because you CARE about human beings and their struggles to be treated like you. Don't you?


If a few (or a lot of) women hate men, a few or many people of color hate whites, a few or more than a few lesbians and gay men hate heterosexuals, YOU CAN LIVE WITH IT. And guess what? It won't even harm you! If one oppressed person's words hurt your feelings, you can live with it. If a group of oppressed people organise, in rage, against what you stand for as a heterosexual white man, as a white ChristianWesterner, know one thing: YOU are still in charge, economically, socially, and institutionally. And one of your people getting their feelings hurt, or being "put off" by the tone of some feminists' writings, doesn't amount to shit, compared to what you do that you aren't even aware you are doing, with your passivity, with your inaction, with your misplaced "helpful" actions, with your overtly harmful actions.

Those of us who are oppressed by white's racism, men's sexism, heterosexuality presented and enforced as natural, or who are hated due to our ethnicity, who are distrusted and despised because we don't look white or WASPy, those of us who are stigmatised and stabbed because we're queer, those of us who don't believe Jesus was THE SON of G-d, those of us who find Spirit in the Sky AND the Earth, are not the haters of the world. Those of us who live on government-apportioned parcels of poisoned land because the rest of our land and its resources was stolen by white male colonisers and conquerors--who don't put the poison where the wealthy, race-privileged folks live--those of us who die of drinking unclean water, who starve to death en masse, who don't have shelter because our homes have been bombed by military personnel, have to deal with the institutionalised and interpersonal hatred that spews forth from well-meaning and mean-spirited people, as well as those who organise around their well-owned hate of the oppressed.

Meanwhile those of us, and I am among this "us" as well as the other "us", are usually passive in the fact of atrocities. We oppressors are silent when men call women foul names. We are quiet when anti-gay terms are hurled. Who join in the cheering when a woman or girl is raped. We don't care when Black women die. We deny genocides happening in our own parts of the world. Callousness and cowardice among oppressors is hateful to those we oppress. Economically exploiting and abusing people sexually is hateful, regardless of how it feels to us. Keeping systems in place that require poverty is hateful. So just ask yourself what you spend your time doing each day. Do you stop the harm to the oppressed? Do you even bother to notice it? Or are you too pre-occupied with one white woman's hatred, or one woman of color calling you out, to focus on the larger problems that will result in women being raped and battered? That are part of the genocides and gynocides we support in more ways than we care to acknolwedge.

I am a white man who has had my actions called out as problematic (to use that coded term usually meaning unconsciously or willfully misogynyistic and/or racist) on many instances. MANY. And guess what? I not only LIVED, but I learned how to be a more humane and caring person. I didn't grumble and walk away thinking bigoted thoughts and organising against "them" as if they were my oppressors. Why? Because I welcome the humanity of the oppressed to inform the actions of the dehumanised oppressor--including me when it includes me, to halt our oppressive ways of being, our ways of "doing civilisation" that require denigration and destruction, targeting specific groups for specific forms of assault, often lethal.

Get your heads out of your own cloudy logic and look at what's happening to poor people of color around the world. Look at what men do to women that is against women's will. And do something to end THAT suffering. Your suffering is real, but it's not more important than anyone else's. And if you're living a privileged life, please learn what the consequences are of doing so, so that while you do so you can also act in responsible, humane ways.

And then, maybe, a few white women won't even consider hating you. And a few women of color won't have to call you out. If you choose to do nothing to stop the atrocities, you can be sure some of those who are harmed will hate you. The question isn't "Why do they hate us (or me)?" The question is "What are we doing that is politically loving?" The question is, "What can I do to be helpful, not harmful?" And please remember, the oppressed will also likely only survive while you thrive and they will certainly die while you live, NOT the other way around. And, just as a reality check, the oppressed allow you to live by taking care of you, NOT the other way around.

So stop your foolishness. Stop your stupidity. And get on with the business of being humane to all people, yourself included. The time for you to indulge in tactical distractions is up.
Posted by Julian Real at 3:03 AM