Anger Does NOT Equal Hate, from The Angry Black Woman blog 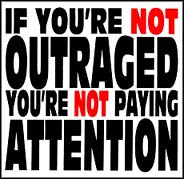 
Things You Need To Understand #8 – Anger Does Not Equal Hate

Ever since I started this blog I’ve had people comment or email or say elsewhere that, by the very nature of its name, this blog is about hate. That because I identify myself as angry (and black), and because I have categories like “Angry At White People” I am promoting hate. Up until now I’ve been willing to blow these folks off, but it’s becoming clear that the conflation of anger with hate (particularly when the anger belongs to people of color) is a persistent meme and not just the crazy rantings of ignorant people. So, I wanted to set the record straight:

Anger Does Not Equal Hate.

People who hate are very often angry, yes. But people who get angry do not always hate.

Let me illustrate by analogy. Everyone is someone’s child. If you were lucky enough to grow up with good parents who loved you, chances are you love them back and always have. But even if you love your parents, sometimes they made you angry. They wouldn’t buy you that puppy, or let you go to that movie, or date that person, or let you eat junk food all day, or whatever. When they denied you, set rules and boundaries, etc. that probably made you angry. Depending on the strength of your desire, it may have made you really angry. Did you hate them then? Do you hate hem still? No. Even if, at the time, in a childish fit of pique you screamed or thought “I hate you!” you didn’t mean it. You were angry.

Say you’re a parent right now. You love your kid(s). They do something crazy like break something expensive, cut school, do drugs, marry someone you dislike. Do you hate them? No, of course not. That’s your child. Are you angry? Hell yes.

Anger and hate are only the same thing to people who have not yet moved beyond the childhood notion of hate, which is: Hate = Anything I Am Pissed About Right Now. No. Hate is much stronger and less fleeting than that.

I am angry, that much is certainly clear. The things I’m angry about or the people I’m angry at? I don’t hate them. I’m just frustrated and annoyed. I deal with my frustration by blogging, by trying to make people understand why I’m angry, by trying to fix things so they don’t make me angry, anymore. But that’s hard to do when people insist on telling me I feel a way I don’t.

What I do hate? Racism. Sexism.

There are many other posts that I could copy and paste here. But here's the page that has 'em all:
http://theangryblackwoman.wordpress.com/required-reading/