Navajo Women and Uranium Mine Poisoning: where Violence Against Women is a mutli-layered issue

What strikes me about what you are about to read is the impossibility of comprehending "violence against women" from a white standpoint. White-centric analysis is utterly insufficient to grasp the depth and complexity of the forms of violence against women discussed below. For me, this piece, along with other posts here at A.R.P. and at the blogs of women of color linked to at this website (to the right), make a strong case that if profeminism isn't centered around the concerns, values, analysis, activism, and lives of women of color, there is little to nothing radical about it. 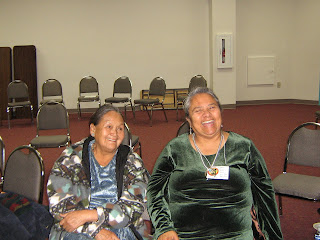 Just about everything that follows below [except what is in brackets and also below the book passages] is from The Navajo People and Uranium Mining by Esther Yazzie-Lewis*, Timothy Benally**, and Doug Brugge***:

There is a story about the Hopis (retold by Frank Waters), who have a similar belief [to their geographical neighbors, the Navajo]: One day, an Anglo man asked a Hopi about it. "What would happen if someone dug into the earth with a steel shovel?" he asked. The Hopi answered, "I don't know, but that would certainly tell us what kind of man he was." Sometimes we--as Indians--have a difficult time understanding the abuse of our environment or other people.

[... The Navajo people are as diverse as any other population, with a range of values and perspectives. And, not in contradiction to that, the authors of this book state that] [t]hey see uranium and materials for atomic power as a monster. The Navajo word for monster is nayee. The literal translation is "that which gets in the way of a successful life." Navajo people also believe that one of the best ways to start to overcome or weaken a monster as a barrier to life is to name it. Every evil--each monster--has a name. Uranium has a name in Navajo. It is leetso, which means "yellow brown" or "yellow dirt." Aside from its literal translation, the word carries a powerful connotation. Sometimes when we [non-Navajo/white people] translate a Navajo word into English, we say it "sounds like" something. We think leetso sounds like a reptile, a monster. It is a monster, as we will explain.

The monster was fertilized in 1896, when radioactivity was discovered, and again in 1898, when the Curies uncovered atomic energy. It took shape in 1934, when Enrico Fermi achieved nuclear fission, and on December 2, 1942, when the first successful nuclear chain reaction too place under a sports at the University of Chicago. The monster was born on July 16, 1945, at Alamogordo, New Mexico, when the first atomic bomb was exploded.

[...] The Bureau of Indian Affairs discovered a uranium/vanadium-bearing mineral in the Navajo Nation in 1941. At the same time, the Navajo Tribal Council passed a resolution to support the United States in opposition to the threat of Nazi Germany. By the time the war broke out in late 1941, Navajo people joined the war effort. Many enlisted in the American armed forces. They joined the military at rates far higher than the general population. Navajo patriots did not realize that they were a central part of the Manhattan Project, the military-civilian organization that built the first atomic bomb. Traditional Navajos would have been horrified had they known what others would do with their yellow dirt.

Navajo people also joined the Cold War. They again enlisted in the military to serve in Korea, Vietnam, and other places of confrontation. They also did their part on the nuclear front: Navajo lands contributed 13 million tons of uranium ore from 1945 through 1988. The nuclear industry dug the world's largest underground or deep uranium mine, sited by Mount Taylor [the Anglo name]. That mountain is Tsoodzil in the Navajo language: the sacred mountain of the south. Navajo people had no say about the desecration of that sacred place by mining.

Mining created a boomtown environment, with all its associated violence. Mining took place throughout the Navajo Nation, and as of today, there are at least one thousand abandoned and unreclaimed uranium mines within the Navajo Nation. We have not yet discovered the extent of toxic waste that came from the mills and plants that processed uranium and other products. In the aftermath of the atomic warfare and energy industry, people talk about using Indian lands to store nuclear waste.

Today, we celebrate the winning of the Cold War after the collapse of the former Soviet Union. What is the "peace dividend" for Navajo people? It is both direct and indirect.

Hundreds of Navajos worked in the open-pit and underground mines. No one told them about the dangers of radiation, so Navajo miners are dying of radiation-related diseases. They leave widows, children, and other dependents, who most often must fight hard to get compensation benefits. Many are denied compensation by a bureaucracy that is bizarre to Navajo thought. The United States Department of Justice delays and quibbles about whether widows were "married" to men who fathered children and made homes with them, making Navajo women the "tag-along" victims of radiation poisoning. These are the direct victims of the death industry that "hot" and "cold" war created.

The Navajo people use earth to build the traditional hogans--log-and-earth structures. In modern times, they use building blocks and concrete containing soil. Today, there are many Navajo homes and schools that are contaminated with radioactive gases. No one warned and no one cared about the waste left behind from the mines. Children play on the tailings left from a thousand or more mining sites, and strong winds blow radioactive dust across Navajo lands.

The people of the American Southwest were not told of the possible effects of bomb testing. Bombs were tested in the New Mexico and Arizona deserts near Indian nations [...]. [T]here may be many communities in [the region] that will suffer the aftereffects of nuclear testing. The Indians who live in those areas receive America's worst health care. Even if others are tested for radiation illness, will anyone care enough to think of Indian victims?

In 1979, the retaining dam at the Church Rock mine near Gallup, New Mexico, broke, sending tons of radioactive waste down the main drainage of the area--the Rio Puerco. Cleanup operations are still going on. That disaster devastated the traditional Navajo grazing country. Navajo people could not market their meat or wool. And during the 1933 hantavirus mania over Navajo deaths, the public victimized the Navajos who lived downstream from the spill all over again.

[...] What else did the uranium industry bring to the Navajo people? Historians identify World War II as a turning point in Navajo life. Before the war, they still were able to enjoy their traditional grazing economy. The war brought Navajo people into the war industry, and the postwar energy boom forced them into the modern wage economy.

[...] The boomtown atmosphere that follows energy development also fosters crime, alcoholism, child abuse, and domestic violence [all of which the white man brought with him to this land]. [...] The uranium mines and mills near Navajo communities required workers. Most often they were semiskilled, and they came from rural communities. Rural Navajos live in family and clan groups, where everyone is related to, or knows everyone else. Jobs attract people who are not related to each other, and Navajo people who had previously lived in clustered villages and towns. Women were taken from the protection of their families, quarrels over wages promoted family fights, and the sudden availability of alcohol (near the dry Navajo Nation) escalated violence. A study of Navajo families near Shiprock, New Mexico, showed that Navajo women were left unprotected in arrangements that fostered family violence.

[...] Urbanization and industrial growth created what James and Elsie Zion (in their paper on domestic violence under Navajo common law) call "a climate of institutionalized violence." The secondary effects of uranium and other mineral development include alcohol-related crime, family disruption, and dependence on a wage economy that comes and goes. The traditional Navajo economy was disrupted by energy development, as was traditional family life. Abused children and brutalized women are as much the victims of atomic energy as others who suffer and die as a direct result of the atomic bomb.
______________________

About the creators of this 2007 ECD book:

*Esther Yazzie-Lewis is President of the Board of Directors of Southwest Research and Information Center in New Mexico. She is not only co-editor, but also provided translation and co-authored two chapters of the book: the Introduction and the discussion of the Navajo cultural interpretations of uranium mining. She received the Nuclear Free Future 2006 Special Recognition Award for Southwest Research and Information Center.

**Timothy Benally did interviewing, translation, and transcription of "Memories Come To Us In the Rain and the Wind", Oral Histories and Photographs of Navajo Uranium Miners & Their Families. The book of 25 interviews is part of the campaign of Navajo uranium miners and their families to gain compensation for the great loss in death and illness brought about by mining uranium, with no warning of its ill effects, during the Cold War era of 1947- 1971. (Timothy Benally and Phil Harrison were the interviewers; translation and transcription were by Martha Austin-Garrison, and Lydia Fasthorse-Begay, and Timothy Benally.)

***Doug Brugge, a non-Indian and white man, has a PhD in biology from Harvard University and an MS in Industrial Hygiene from the Harvard School of Public Health. Doug Brugge was director and photographer for "Memories Come To Us In the Rain and the Wind", Oral Histories and Photographs of Navajo Uranium Miners & Their Families.

I was led to research this story by checking out this blogpost at CENSORED NEWS: Indigenous Peoples and Human Rights News, titled "Woman Warriors: Indigenous Uranium Forum", linked to just above.

Post Script: One of the few past boyfriends I have cared deeply about was born and raised in Shiprock, New Mexico.