Below is a cross post from Itoro's blog, Thoughts of My Mind (published Jan. 7 of this year). She has welcomed me to re-publish it below as a guest post. I am very grateful to her and am honored to have her voice and perspective as part of this blog. I hope this is not her last guest post. I also hope you take a lot from what follows. The wonderful artwork is by activist Catalina Nieto; I got her permission to reprint it here. Blessings to Itoro and to Catalina. 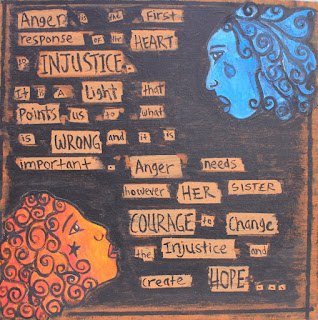 
In 2012-2013, I will be tender towards myself and those I love, I will not espouse words and phrases without practicing them to the fullest extent of what they mean, I will be honest and forthright, disciplined and resilient। I am not a problem to be fixed, this system and the ways in which we regard one another needs fixing and it has to be a people effort. By no means, is this a fluffy, kumbaya type of sentiment, or something that can be simply theorized into abstraction for the comfort of not truly practicing it in reality. This is quite material and concrete. This means, that the power has to be laid down, the hoarding has to be laid down, the lies have to be laid down, put on the table and directly talked about. The ability to imagine everyone there as equals also has to be put on the table so we can say it is a true possibility for us.
Happy New Year! Happy Blog Space! And Happy many spaces we are creating to do the work that needs to be done!

The beautiful artwork featured here is from fellow warrior and activist Catalina Nieto. Her work has been featured here in previous posts. I am happy to say that many people have taken notice of her amazing work! Re-posted from Thoughts of My Mind, http://thoughtsofmymind-itoro.blogspot.com.
Posted by Julian Real at 11:39 AM