John Lennon Is Kept Alive in Minds and Hearts, Globally, on December 8, 2010: And Yoko Ono offers a story of remembrance, of laughter, not of tears

[This A.R.P. post is a companion post to one done earlier in the day. You may link to it *here*. See also the post of fellow Beatle fan and feminist blogger, Cara, *here* on her blog, The Curvature.]

Above is a BBC News photo which appears the article on the source website, may be linked to by clicking on the title which appears later in this post ["John Lennon celebrated on anniversary"]. But first a story from feminist and artist, Yoko Ono, published in Wednesday's New York Times. You may link back by clicking on the title. The photo just below is also from that NYT piece and is credited to its photographer in the caption.

JOHN and I are in our Dakota kitchen in the middle of the night. Three cats — Sasha, Micha and Charo — are looking up at John, who is making tea for us two.

Sasha is all white, Micha is all black. They are both gorgeous, classy Persian cats. Charo, on the other hand, is a mutt. John used to have a special love for Charo. “You’ve got a funny face, Charo!” he would say, and pat her.

“Yoko, Yoko, you’re supposed to first put the tea bags in, and then the hot water.” John took the role of the tea maker, for being English. So I gave up doing it.

It was nice to be up in the middle of the night, when there was no sound in the house, and sip the tea John would make. One night, however, John said: “I was talking to Aunt Mimi this afternoon and she says you are supposed to put the hot water in first. Then the tea bag. I could swear she taught me to put the tea bag in first, but ...”

“So all this time, we were doing it wrong?”

We both cracked up. That was in 1980. Neither of us knew that it was to be the last year of our life together.

This would have been the 70th birthday year for John if only he was here. But people are not questioning if he is here or not. They just love him and are keeping him alive with their love. I’ve received notes from people in all corners of the world letting me know that they were celebrating this year to thank John for having given us so much in his 40 short years on earth.

The most important gift we received from him was not words, but deeds. He believed in Truth, and had dared to speak up. We all knew that he upset certain powerful people with it. But that was John. He couldn’t have been any other way. If he were here now, I think he would still be shouting the truth. Without the truth, there would be no way to achieve world peace.

On this day, the day he was assassinated, what I remember is the night we both cracked up drinking tea.

They say teenagers laugh at the drop of a hat. Nowadays I see many teenagers sad and angry with each other. John and I were hardly teenagers. But my memory of us is that we were a couple who laughed.


Yoko Ono is an artist.

John Lennon fans have sung his songs, laid flowers and lit candles on the 30th anniversary of the Beatle's death.

Vigils have been held in New York, where the music legend was shot dead, and his home city of Liverpool.

"I really do feel like I got a sense of peace here tonight," said Adam Byrne, 34, from Liverpool. "I think his message is still as strong as ever."

His widow Yoko Ono played a concert in Tokyo, while gatherings have also taken place in cities from Prague to Havana.

The musician was 40 years old when he was killed by crazed fan M*** C****** [edited by Julian] outside the Dakota Building in Manhattan.

In Liverpool, several hundred people with candles and glowsticks braved cold temperatures to sing Lennon songs and listen to poetry inspired by the late Beatle.

The vigil was held next to a peace monument that was unveiled by his first wife Cynthia and son Julian in October and has been dedicated to John Lennon.

A giant photograph of John with Julian watched over the crowd, alongside a banner bearing the name of one of John's signature songs, Give Peace A Chance. 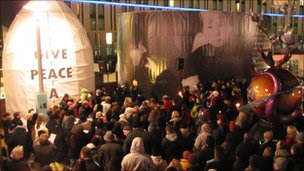 "That message is still loud and clear today as much now as it was then," said Mr Byrne.

"It's nice to see that people still remember John and we still carry a piece of John with us. Peace is possible."

Chris McIver, from the Wirral, said it was a "very nice, peaceful, happy evening".

"We're here just to remember John and to reflect on the night that we heard the news ourselves, to think of John and to celebrate."

Mr McIver recalled hearing the news of Lennon's death on TV. "I just couldn't believe it," he said.

"I remember just going into the lounge, sitting on a chair and I couldn't move for about an hour. I was in complete shock."

Phil Hanson, another fan in Liverpool's Chavasse Park, described the atmosphere as "lovely, warm and loving".

We still learn so much from him today. John, I love you!” End Quote Yoko Ono

In New York, hundreds of fans gathered in Central Park, near the spot where Lennon was shot.

Flowers were laid in the Strawberry Fields area, which was converted to a memorial garden after his death.

Ono performed at a charity concert in Japan called Dream Power John Lennon Super Live, which raises money for schools for deprived children all over the world.

"On this tragic anniversary please join me in remembering John with deep love and respect," she said in a statement.

"In his short lived life of 40 years, he has given so much to the world. The world was lucky to have known him.

"We still learn so much from him today. John, I love you!"

Their son Sean, now a musician, used Twitter to respond to the tributes to his father.

"Thank you for all the kind words," he said. "Let's all just pray for peace on earth. That's what he cared about most."

More on This Story