You know how THEY mistreat lesbians over THERE. Don't you?


One of many things radical feminists of color brought to my consciousness was how to responsibly speak about conditions women face globally. For example, not letting white people always speak for women of color. Not assuming that one person of color speaks for everyone else. Not assuming that what happens in the Global North is the same as what happens in the Global South. Not assuming that the West and the East are the opposite of each other. Not assuming Asia means Korea, Japan, and China only. Knowing that one in five women in the world is Chinese. Not assuming Indigenous people are all gone. Knowing that the people who understand globalised economics the best are poor and of color, not rich and white. Understanding that access to clean water is a critically gendered issue for most women on Earth. The list is endless, really. And I strive to keep learning because the list is endless.

The bottom line for me is to do my best to center the many experiences and analyses of radical women of color in the formation of values and activism this blog supports. And to make sure to support marginalised voices from the Global South and East in Northern and Western media I have access to, including progressive and justice-seeking radical media. And to support the activism of women from the Fourth World.

A critical evaluation by radical women of color is how completely hypocritical white men's cultures and values can be and often are. White men say one thing and do another: like preach about contraception being bad while promoting and protecting men raping children and women and also then condemning girls and women for wanting abortions as if pregnancies were all immaculate.

White men cover each others tracks. White men have one another's backs. The spoken and unspoken bonds among white men make them a formidable bunch to try and challenge and hold accountable. White het men usually and generally don't have a clue about what the majority of human beings experience that is WHM supremacist in origin. And this makes that group very ignorant about the world and also very dangerous, in part because they think they know everything about everyone. They think they are the experts. They think that G-d looks like them. And they think women, especially lesbian women of color, are not created in G-d's image. They don't grasp the spirituality in The Color Purple by Alice Walker (not by Steven Spielberg). They don't get what the women in For Colored Girls are talking about--in soliloquies written by Ntozake Shange (not Tyler Perry). White men can grasp it all because they are human. But white men usually don't because they think only they are fully human.

A typical expression of U.S./Western/WHM Supremacist Hypocrisy-As-A-Way-Of-Life is to deny that what happens in other places--places far away from "US", also happen right here, right now, where we are, where we live. Like genocide or terrorism. For now, let's take the issue of terroristic violence against lesbians. Some progressive media in the white West have been focused on those outrageous Africans--you know--those BLACK Africans, who have a country or a culture or a continent or something like that? Yeah, THOSE Africans! The ones who hate gays and lesbians and want them all to die. You know. Those people over there, not here, who think that violence against lesbians and gay men is okay? Yeah, THOSE people, far away from "US".

Consider, if you would, the following two stories and let me know if your conclusion is that the U.S. wants lesbian women to live lives free of sexual/gender violence.

First, from pinkpaper,com, news from a country in Southern Africa. Please click on the title to link back.

A lesbian couple have made history in Botswana by becoming the first to publicly reveal their relationship despite homosexuality being illegal in the country.
Jonny Payne
news.PinkPaper.com
Monday, 29 November 2010
28 November 2010

A lesbian couple have made history in Botswana by becoming the first to publicly reveal their relationship despite homosexuality being illegal in the country.

Onkemetse Pule, 26, and Lawrence Kwataka, 24, met through the dating pages of their local newspaper, The Voice, ten months ago, and they have since informed family members of their relationship.

Homosexuality is currently illegal in Botswana, but they felt the time was right for them to show the way for other gay and lesbian couples even though those found having been engaged in gay acts can face imprisonment.

Pule told The Voice: “We have nothing to hide. People should know that lesbian relationships exist. It’s only that we are not being given a chance to express it in the same way as those in a heterosexual relationship. We want the same rights and freedom of expression. If we kiss and hug, hold hands in public, we don’t want to face the prospect of arrest for what society regards as a crime.

The couple, known gay rights activists in the country, believe there are many other gay people in Botswana who are afraid to come out for fear of persecution and discrimination.

“Until gay and lesbians are given the same rights, people will continue to stare and snigger at us with a nudge that says, ‘look at them," they say.

“We are not the only ones – there are many other couples out there. We have friends who feel the same way and just want to spend their time together without making a big deal out of it. Our society needs to remove the labels that say ‘gay’ or ‘straight’ or ‘bisexual’ or whatever, and accept people as people.”

Earlier this month Botswana's government voted in favour of removing sexual orientation from a UN resolution on minorities protected from discriminatory grounds for execution.

But last month former president, Festus Mogae, urged African leaders to decriminalise homosexuality to help the fight against AIDS on the continent. He said: “There was no need to discriminate and stigmatise homosexuals and sex workers because they are part of society.”

Under Mogae’s leadership and that of current President Ian Khama, no one has been prosecuted in the country for being gay for more than three years.
*          *          *
Next, we have this, from North America, or some country or culture in it. It's so hard to keep those countries in North America "straight". From rawstory.com. Clicking on the title will link you back to the source site.

Judge: Let lesbians into military so male GIs can turn them straight 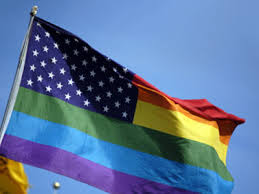 The conservative news site The Daily Caller has removed part of an article that suggested lesbians be allowed into the US military so that their male colleagues can "convert" them.

Critics say the article went as far as to suggest corrective rape for lesbians.

"Lesbians should be allowed to serve, gay men should not," declared Joe Rehyansky in an article published Monday. Rehyansky, an Army veteran who served in Vietnam, is a part-time magistrate in Hamilton County, Tennessee, and a former assistant district attorney.

In the original article, Rehyansky concluded that his lesbians-only policy "would get the distaff part of our homosexual population off our collective ‘Broke Back,’ thus giving straight male GIs a fair shot at converting lesbians and bringing them into the mainstream."

That alarmed some LGBT activists, who note that much of the article before that comment argued that men are rapists by nature. Rehyansky's argument that gay men should continue to be banned from the military was based on this notion:

[S]houldn’t the overwhelmingly straight warriors who answer their county’s call be spared the indignity of showering with other men who achieve lascivious enjoyment from the sight of those lithe naked bodies, and who may be tempted to seek more than the view? They are, after all, guys.

In the early evolutionary years of the human species, Rehyansky argued, "It fell to men to swing through the trees and scour the caves in search of as many women as possible to subdue and impregnate — a tough job but someone had to do it."

Writing at TBD.com, Amanda Hess reads between the lines of Rehyansky's article: "Once all the lesbians are easily accessible in one place, an army of straight dudes will turn them all straight, presumably through that time-tested tactic of subduing and impregnating women against their will."

Hess reports that The Daily Caller briefly dropped the article when it began to gain attention, only to put it back online but without the "converting lesbians" comment. The comment has since been republished at other Web sites.

According to his LinkedIn profile, Rehyansky's specialties are "sending criminals to prison" and "astute political analysis."

The Daily Caller was launched earlier this year by Tucker Carlson, formerly of CNN and MSNBC and now a Fox News contributor, and Neil Patel, a former adviser to Vice President Dick Cheney.
Posted by Julian Real at 1:06 AM