"Oops! We Murdered Again": The Worst Environmental Disaster in U.S. History is NOT the BP Oil Spill of 2010

16 June 2010 ECD UPDATE: Last night U.S. President Obama proclaimed the following, opening his address to the U.S. Empire: "Already, this oil spill is the worst environmental disaster America has ever faced.  And unlike an earthquake or a hurricane, it’s not a single event that does its damage in a matter of minutes or days.  The millions of gallons of oil that have spilled into the Gulf of Mexico are more like an epidemic, one that we will be fighting for months and even years." I say BULLSHIT.

[this awesome poster is from, and is available for sale, here] 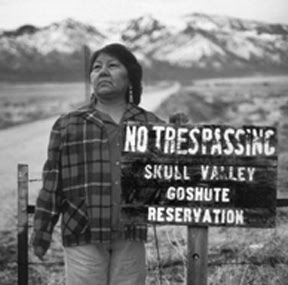 [photograph of Margene Bullcreek, Skull Valley Goshute tribal member and environmental activist, is from here. Date: approximately 1998-2000 ECD]
What follows are excerpts from a report, Environmental Racism, Tribal Sovereignty and Nuclear Waste. Following that is my commentary.

"There is nothing moral about tempting a starving man with money."
– Keith Lewis, of the Serpent River First Nation in Ontario, reflecting on his impoverished community’s 50 years of working in and living near uranium mines & mills, and the health and environmental catastrophe that has resulted.

Both the federal government and the commercial nuclear power industry have targeted Native American reservations for such dumps for many years. In 1987, the U.S. Congress created the Office of the Nuclear Waste Negotiator in an effort to open a federal "monitored retrievable storage site" for high-level nuclear waste. The Negotiator sent letters to every federally recognized tribe in the country, offering hundreds of thousands and even millions of dollars to tribal council governments for first considering and then ultimately hosting the dump. Out of the hundreds of tribes approached, the Negotiator eventually courted about two dozen tribal councils in particular.

Magnesium Corporation is the nation’s worst air polluter, belching voluminous chlorine gas and hydrochloric acid clouds; hazardous waste landfills and incinerators dot the map; with a name straight out of Orwell’s 1984, Envirocare dumps "low level" nuclear waste in the next valley and is applying to accept atomic trash hundreds of times more radioactive than its present license allows. Dugway Proving Ground has tested VX nerve gas, leading in 1968 to the "accidental" killing of 6,400 sheep grazing in Skull Valley, whose toxic carcasses were then buried on the reservation without the tribe’s knowledge, let alone approval. The U.S. Army stores half its chemical weapon stockpile nearby, and is burning it in an incinerator prone to leaks; jets from Hill Air Force Base drop bombs on Wendover Bombing Range, and fighter crashes and misfired missiles have struck nearby. Tribal members’ health is undoubtedly adversely impacted by this alphabet soup of toxins. Now PFS wants to add high-level nuclear waste to the mix.

[For the rest of this report demonstrating ceaseless resistance by Indigenous North Americans against the tyrannical abuses of the U.S. government, please click here or on the title just above. For updates on this grassroots resistance movement, see here]

The U.S. will try and pretend that its history is not comprised of a set of on-going genocidal/ecological/environmental disasters. Because that's what "WE" did, not BP, not one oil tanker called The Exxon Valdez. WE did it. And WE are still doing it. The problem isn't just one corrupt, out-of-touch CEO, it is US, the U.S., the U.R.A.

I do believe of BP's executives should be tossed in an oily jail forever for doing what they've done--along with any former U.S. president who removed regulations protecting the environment. "The environment" necessarily includes the atmosphere, animals, land, water, and people living in those environments. It is the entire petrol/oil drilling industry, overall, must be stopped in its greasy, greedy tracks.


Without question, the biggest disaster on this land was the terroristic and toxic spread of the White Man and his bloody wake of murdered Indigenous North Americans, his tearing down of trees, enslaving animals and also human beings, West Africans, to his plow, plant, and harvest his fields to grow single crops destroying multi-species ecosystems, creating agribusiness including machinery and chemicals that have no moral or ethical business existing on Earth, and developing corporations which are designed to put profits over people, animals, and environment, now with relatively little regulation or accountability.

In what compassionately moral or philosophically ethical universe is any and all of the following acceptable behavior?
In what sense is all that not bigger than what is currently going on in the Gulf of Mexico? Who decides which oil spills are reported and which are covered up, kept out of the press? Who decides the time period in which "the worst environmental disaster in U.S. history" happened?

How is poisoning the land with nuclear waste, disproportionately near places where poor not rich people live, near places where Indigenous people and other people of color, not whites, live, not an environmental disaster bigger than this currently active one in the Gulf of Mexico--which is owned not by Mexico, but by the thieving and savage white male dominated U.S.?

The answer is this: the U.S. government and the militarily protected corporations that own it, and the media also owned by those corporations--each and every one of them ecocidally white male supremacist to the core of their doing--will always wish to portray itself as having done either nothing wrong, or as maybe having made a few mistakes in the past. "Oops, we murdered again!" ought to be the U.S.'s motto. Followed by no meaningful apology or attempts at justice-creating reparations and radical reforms.

Environmental disaster, just like human oppression, isn't a mistake. It's part of the white master plan. An oil rig blowing up may not be a willful act by one worker or a CEO (who ought not, in good conscience, ever be called "a worker"), but there were plenty of opportunities to make sure it never happened. And moving forward with technologies that have no soul, that are bounded by no ethical parameters, no moral imperatives, means that we get and will get a series of great disasters. Only the most immoral and callous of minds would conceive of punching holes in the deep sea such that when they leak they don't know what to do about it because their technology didn't plan for that eventuality. Only the most unethical and reckless souls would permit nuclear power to be generated with the only solution to "what to about the waste that will be toxic for thousands of years" is to plant it in the ground near Indian reservations. See here for more and read this:


The waste, sometimes called spent fuel, is dangerously radioactive, and remains so for thousands of years. When it first comes out of the reactor, it is so toxic that if you stood within a few meters of it while it was unshielded, you would receive a lethal radioactive dose within a few seconds and would die of acute radiation sickness [wikipedia] within a few days.

What "ethical" men would wish to produce this? White men. What "great" men would seek genocide as a means of establishing "a moral civilisation"? European and European-descended Christian men. Make no "mistake" about it. Living off of the values and practices of refined white men is as good for humanity, animals, plants, and the Earth as a diet consisting only of refined white sugar.

Support the deportation of illegal, alien, and criminal occupiers, aka "refined white men" from North America.