An Open Letter to President Barack Obama in response to your Proclamation Against Sexual Assault in the U.S. 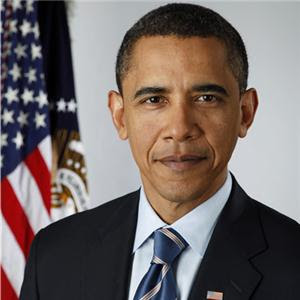 [image of U.S. President Barack Obama is from here]

I am concerned that actions that can lead to a decrease in sexual assault, particularly against populations most vulnerable in our free society, are not being accomplished, and are not even being advocated by the Leader of this land.

As you well note, Native American women are at particular risk for rape, at double the rate of the rape of women across race in the U.S. And as you may know, over 80% of the rapists of Native women are white men. Will you support amnesty for any Native American person living on reservation land, within the boundaries of their own Nation, to use their authority and agency as citizens of their Nations to shoot to kill any white man who trespasses as an illegal alien, as a terrorist, onto Indian land without prior permission and expressed reason to cross onto the land of a community with a specific destination that is not "in order to rape a Native American woman"?

Are you willing to state that rape functions normally and systematically as a form of male supremacist terrorism against female human beings, that rapists are terrorists, so that we can begin to note that inside and outside of police forces, inside and outside of the military, and inside and outside of women's homes and various workplaces and institutions of learning and prayer, white men are the demographic that ought to be stigmatised as terrorists, if any group ought to be. Can you instruct the media to make this clear, so that white U.S. folks more clearly understand that Arab-American Muslim men or women living in the U.S. are no longer mistakenly designated as terrorists against other U.S. citizens? Can you similarly instruct the media to report that the gender, race, and religious identity of "the terrorist on U.S. soil" is usually a white Christian-identified heterosexual husband or boyfriend of a woman, or the father figure of a girl; it is that demographic which statistically and in practice, threatens the lives, the human rights and health, of the women and girls white heterosexual men systematically sexually abuse?

Another particularly vulnerable population to rape and other sexual assault are women and girls who are being pimped, trafficked, and sold into sexual slavery. Are you willing to take leadership to criminalise the acts of U.S. citizens procuring women anywhere in the world for the purposes of obtaining sexual acts in exchange for money? Will you also decriminalise the acts of pimped, trafficked, and enslaved women seeking money from procurers, so that when they are raped they are not deterred from reporting the rape to the police out of fear of being arrested, harassed, and further assaulted?

Another at risk population is what this country terms "immigrants" and "migrants", among other more pejorative terms, like "illegal aliens". Are you willing to make it law that any person currently existing, working, residing, or living within the boundaries of U.S. territories who is raped or otherwise sexually assaulted by a U.S. citizen, is free to report the rape and obtain medical attention and other survival services as needed, and not be charged with trespass or sent back to their country of origin? And that the rapists' and assaulters' rights to reside within the U.S. as a free citizen are revoked?

With regard to children, are you willing to have a one strike policy for child molesters and adult incest perpetrators, so that they may not be allowed to continue to reside in free society; that they will, necessarily, suffer the consequence of loss of freedom should they sexually assault a child? Are you willing to publicly note that it is men within the family who are the most likely people to commit sexual assault, and that it is women and girls within families that nurture and care for predators who are the majority of victims of sexual assault? Are you willing to make it law that no father or grandfather who has committed any act of child molestation or child sexual assault be allowed visitation of any of his biological children or grandchildren, adopted children, step-children, or any other children in his family or the families of those with whom he associates?

With regard to Catholic priests and other ordained clergy: are you willing to devote resources for making sure that those clergy who abuse children are put away behind federal prison bars, not merely transported to another district or church congregation to reoffend? Are you willing to make a public statement of outrage to Pope Benedict and all the cardinals, bishops, and other leaders within the Catholic Church's organisational structure, declaring the criminals who are aiding and abetting terrorists within a terroristic institution that specifically and with structurally approved provisions and policies, regularly places known male sex offenders in proximity of children and women? Are you supportive of preventing known sex offenders from congregating and worshiping with their victims? Will you offer leadership in declaring as moral, good, and right, doing whatever is lawfully necessary to stop religiously-protected perpetrators from serially committing sex crimes against humanity?

What steps are you planning to take to ensure that the sexual harassment and assault of girls by boys, inside and around public school systems, is made an actionable offense resulting in expulsion, so that those victimised are safe to go to school the days following being harassed and assaulted without being further abused, humiliated, and degraded?

Will you publicly promote and advocate for women and children to defend themselves against family members who are serial sexual predators and sexual assault perpetrators, such that it becomes fully legal and not criminal for the victims to employ strategies against their perpetrators, to any degree that is appropriate and necessary to make survivable the process of safely escaping conditions of systematic sexual or gendered terrorism within the family home, including the use of premeditated lethal force by those victims?

Afghan and Iraqi citizens--women, as a matter of common practice if not overt policy, are raped as well as terrorised through other militaristic means by U.S. troops--men. Are you willing to be personally, ethically, and legally responsible for men's rapes and deaths of women and girls? What is your justification for allowing this militarised political predation to continue? If for no other reason that to stop U.S. male soldiers from raping Afghan and Iraqi women and girls, will you please remove our troops from our wars against the Iraqi and Afghan people, as you were instructed to do by those citizens who elected you into the office you now hold?

Finally, will you identify the crimes of rape, sexual assault, and sexual harassment as male supremacist hate crimes against women, given that these crimes, as you note, are overwhelmingly committed by men against women, and by adolescent and teen boys against girls? Do you support these crimes being legally framed, understood, treated, and prosecuted as such under federal law?

Toward a more just, safe, and humane world in which children and women can live with men in peace, not war.

I look forward to your reply.

Julian Real, a residing citizen of the U.S.A.

For those who have not yet read it, this is President Obama's official statement:

Office of the Press Secretary
For Immediate Release April 1, 2010
NATIONAL SEXUAL ASSAULT AWARENESS MONTH, 2010
- - - - - - -
BY THE PRESIDENT OF THE UNITED STATES OF AMERICA
A PROCLAMATION
Every day, women, men, and children across America suffer the pain and trauma of sexual assault. From verbal harassment and intimidation to molestation and rape, this crime occurs far too frequently, goes unreported far too often, and leaves long-lasting physical and emotional scars. During National Sexual Assault Awareness Month, we recommit ourselves not only to lifting the veil of secrecy and shame surrounding sexual violence, but also to raising awareness, expanding support for victims, and strengthening our response.
Sexual violence is an affront to our national conscience, one which we cannot ignore. It disproportionately affects women -- an estimated one in six American women will experience an attempted or completed rape at some point in her life. Too many men and boys are also affected.
These facts are deeply troubling, and yet, sexual violence affects Americans of all ages, backgrounds, and circumstances. Alarming rates of sexual violence occur among young women attending college, and frequently, alcohol or drugs are used to incapacitate the victim. Among people with disabilities, isolation may lead to repeated assaults and an inability to seek and locate help. Native American women are more than twice as likely to be sexually assaulted compared with the general population. As a Nation, we share the responsibility for protecting each other from sexual assault, supporting victims when it does occur, and bringing perpetrators to justice.
We can lead this charge by confronting and changing insensitive attitudes wherever they persist. Survivors too often suffer in silence because they fear further injury, are unwilling to experience further humiliation, or lack faith in the criminal justice system. This feeling of isolation, often compounded with suicidal feelings, depression, and post-traumatic stress disorder, only exacerbate victims' sense of hopelessness. No one should face this trauma alone, and as families, friends, and mentors, we can empower victims to seek the assistance they need.
At the Federal, State, local, and tribal level, we must work to provide necessary resources to victims of every circumstance, including medical attention, mental health more services, relocation and housing assistance, and advocacy during legal proceedings. Under Vice President Biden's leadership, the 2005 reauthorization of the Violence Against Women Act included the Sexual Assault Services Program, the first-ever funding stream dedicated solely to providing direct services to victims of sexual assault. To further combat sexual violence, my 2011 Budget doubles funding for this program. Through the Justice Department and the Centers for Disease Control, we are funding prevention and awareness campaigns as well as grants for campus services to address sexual assault on college campuses. The Justice Department has also increased funding and resources to combat violence against Native American women.
As we continue to confront this crime, let us reaffirm this month our dedication to take action in our communities and stop abuse before it starts. Together, we can increase awareness about sexual violence, decrease its frequency, punish offenders, help victims, and heal lives.
NOW, THEREFORE, I, BARACK OBAMA, President of the United States of America, by virtue of the authority vested in me by the Constitution and the laws of the United States, do hereby proclaim April 2010 as National Sexual Assault Awareness Month. I urge all Americans to reach out to victims, learn more about this crime, and speak out against it.
IN WITNESS WHEREOF, I have hereunto set my hand this first day of April, in the year of our Lord two thousand ten, and of the Independence of the United States of America the two hundred and thirty-fourth.
BARACK OBAMA
Posted by Julian Real at 5:35 PM