Bad Press is like Nazi Atrocity, says a senior priest at a Vatican Good Friday dinner, and this peculiar twist of logic ISN'T being brought to you by the MRAs or Mel Gibson (this time, anyway) 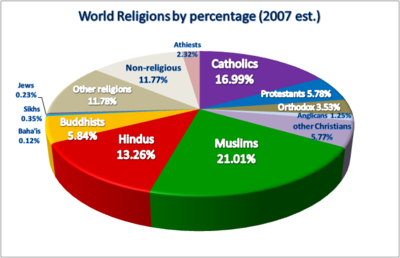 [this pie chart is from here]
With many, many thanks to Jill over at Feministe, this is a cross post.


Genocide and thousands of years of persecution vs. an unflattering New York Times article: Kind of the same!

by Jill on 4.2.2010 ·
So says the Catholic Church, anyway. And not some random running-his-mouth-off priest, or the ever-ridiculous Bill Donohue. No, this is a senior priest, at a Vatican Good Friday service, who claims that the current “attacks” on the Church — attacks which amount to pointing out the Church’s long-running cover-up of child sexual abuse — are kind of like what the Jews suffered.


Benedict sat looking downward when the Rev. Raniero Cantalamessa, who holds the office of preacher of the papal household, delivered his remarks in the traditional prayer service in St. Peter’s Basilica. Wearing the brown cassock of a Franciscan, Father Cantalamessa took note that Easter and Passover were falling during the same week this year, saying he was led to think of the Jews. “They know from experience what it means to be victims of collective violence and also because of this they are quick to recognize the recurring symptoms,” he said.

Father Cantalamessa quoted from what he said was a letter from an unnamed Jewish friend. “I am following the violent and concentric attacks against the church, the pope and all the faithful by the whole word,” he said the friend wrote. “The use of stereotypes, the passing from personal responsibility and guilt to a collective guilt, remind me of the more shameful aspects of anti-Semitism.”
…
Father Cantalamessa’s comments about the Jews came toward the end of a long talk about scripture, the nature of violence and the sacrifice of Jesus. He also spoke about violence against women, but gave only a slight mention of the children and adolescents who have been molested by priests. “I am not speaking here of violence against children, of which unfortunately also elements of the clergy are stained; of that there is sufficient talk outside of here,” he said.

Better or worse than “The devil made me do it“?

The Chief Rabbi of Rome has a good response:

Berlin - Comparing criticism of the pope in the child sex scandals engulfing the Catholic Church to anti-Semitism is insulting and impertinent, the head of the Central Council of Jews in Germany said Saturday.

"It is impertinent and an insult to the victims of sexual abuse as well as victims of the Holocaust," Stephan Kramer told AFP.

The parallel was made in a Good Friday service by Father Raniero Cantalamessa, the pope's personal preacher, who said he received a letter from a Jewish friend criticising the attacks against the pope and Catholic Church over the response to predator priests.

"The stereotyping, the transfer of personal responsibility and blame to a collective blame reminds me of the most shameful aspects of anti-Semitism," the friend wrote, according to Cantalamessa.

The remarks have triggered a chorus of criticism from Jewish groups and those representing victims of abuse by Catholic priests.

The Vatican "is falling back upon the regular methods it has used over the decades to suppress and hide any affairs which compromise" the Catholic Church, said Kramer. - Sapa-AFP
Posted by Julian Real at 4:14 AM