Three Waves--Each One White-capped: A Racist History of Feminism 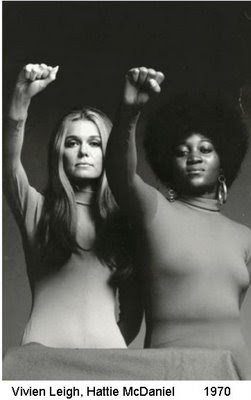 [image is from here]
Let's face it: in the U.S., the white woman on the left is better known than the Black woman on the right. This reality is emblematic of "the story of feminism".

Can anyone point out what is totally messed up about this summary of "feminism"? Read more http://www.docstoc.com/docs/27854175/Birth-of-Feminisms-%E2%80%93-Lecture-1-Introduction-to-Feminism

Indigenous women, not white women, in North America, founded many of the principles, values, and practices that white women later borrowed from to arrive at what is now termed "the First Wave" of feminism.

What is termed "the Second Wave" which generally is assumed to have been at its peak in the 1960s and 1970s, was multi-ethnic, multi-racial, and multi-issued. Things that are assumed to be "white" causes, like sexual harassment, were, in fact, driven by the experiences and speaking out by African American women. The anti-pornography movement was never all white and the campaigns to bring about a civil rights remedy to women harmed by the pornography industry, was always primarily comprised of activists who were working class and poor women, of many colors, who came out of the sexxxism industries. They are invisibilised because the writers of "history" consider academic writings to be Gospel Truth, and most women who are activists don't write books, in part because they are too busy fighting for their lives in other ways. Or they do write them, but can't get them published because they aren't affiliated with a university. Angela Davis, Audre Lorde, Alice Walker, Beverly and Barbara Smith, Pat Parker, June Jordan, Chrystos, Gloria Anzaldua, Florynce Kennedy, bell hooks, and many, many more women of color were foundational Second Wave feminists. When you think "Second Wave" think of them.

Before, during, and after each of  those white-centric waves, women of color were always fighting against patriarchal and racist and classist oppression.

Most feminists in the world today are not European. They are Asian. This is obvious, given that most women in the world are Asian.
Posted by Julian Real at 2:46 AM