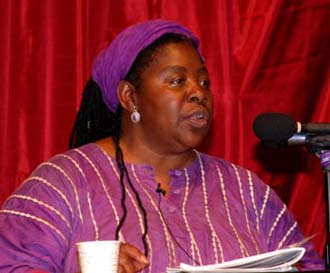 [photograph of Reproductive Rights Activist and Feminist Writer Loretta Ross is from here]
The following article is already a year old. So it is worth revisiting to see what, if anything, has happened regarding U.S. government policy and practice with regard to Reproductive Rights centered on the experiences of the most marginalised and disenfranchised women facing reproductive health, support, and safety issues. What follows is from *here* at On The Issues. The artwork below is also from that web page.

Loretta Ross is the National Coordinator of SisterSong, a national coalition of 80+ women of color and allied reproductive justice organizations headquartered in Atlanta. Ross researches and writes extensively on African American women and abortion and co-authored Undivided Rights: Women of Color Organize for Reproductive Justice, a book on the history of the activism of women of color.

I’m not a policy wonk. I am very ill suited to talk frequently to legislators to ask them to do the very jobs they were elected to do and for which they already get paid. From that admittedly jaded perspective, I’m not anyone’s first choice to do lobbying or “education” of elected officials.


The shape of things

Although the reasons may be obvious why the reproductive justice community must be engaged and clear about what we want, I’d like to state a few points to get them organized in my head:

1. This may be the best opportunity to advance a reproductive justice agenda in my lifetime (okay, I’m over 50 so my urgency may be simply age-related).

2. We have developed strong values in the reproductive justice movement that keep the most vulnerable among us at the top of our concerns: girls, poor women, young women, incarcerated women, lgbtq folks, substance-abusing women, immigrant women, disabled women, teen mothers.

3. We have great collaborations among the leading groups promoting reproductive justice at the grassroots.

4. We have an exciting framework that has transformed the pro-choice movement by raising critical intersectional issues on race, gender, class, age, sexual orientation, ability and immigration in a way that is being heard and embraced beyond women of color.

5. We have allies in the Obama Administration who are strong, have serious integrity and care as strongly as we do about the vulnerable populations and issues we prioritize.

6. We have determined opposition from those opposed to human rights – not just for women of color, but those who also oppose bringing the United States to human rights conversations in a constructive way, either domestically or internationally.

7. We have well-financed anti-woman, anti-gay forces in communities of color that will try to thwart any reproductive justice agenda.

8. And we have a small economic crisis on our hands.

Having said all of that, I believe we need to have a discussion about how we can take advantage of this historic moment to advance a reproductive justice agenda that will benefit women, men and families of color to advance and protect their full human rights.


How do we get what we want?

I believe we need to organize an agenda around three important and convergent conversations:

First, we need to discuss what we believe. As reproductive justice activists evolving into a powerful movement, we need to seek agreement on our non-negotiables.

Will we sacrifice poor women during policy discussions on abortion, failing to insist on the repeal of the Hyde Amendment because “conventional wisdom” says “taxpayers don’t want to pay for abortions for poor women?”

Will we sacrifice lesbians and trans folks if they do not fit poster-child images of who needs to be covered under regulations of assisted reproductive technologies? Will we fight for the sexual and mothering rights of women who are incarcerated even while our society dismisses their needs as people who have few human rights? Will we insist that women who are disabled have the same sexual rights as women who are not disabled? Will we demand that the sexual rights of young people are respected?

Exactly who will we sacrifice on the altar of expedience? Who will make that call?

Second, we need to discuss what we want. This means that we not only want access to public policy tables, but in fact, to change the fundamental nature of what’s served at those tables. Too often, women are forced to compromise on our human rights, or told to wait for a more propitious time to ask for what we need and deserve. Do we want public policies that appear to work, but don’t really meet our needs?

For example, in the 1980s, I worked to help pass the Family Medical Leave Act of 1993. I protested when the Washington Beltway “experts” said we could not ask for paid leave because the opponents would not accept that. I knew that without paid leave, many women would not be able to take advantage of the FMLA. In fact, many more women would be excluded than covered because few of us can afford an unpaid leave without ending up homeless. I was told that we could come back and amend the bill later to include paid leave. I’m still waiting for that day to come sixteen years later.

This is an example of what can happen when we are not clear and united in demanding what we want. We are vulnerable to classic divide-and-conquer strategies by both our allies and our opponents. It is often believed that any bill is better than no bill. It is also believed that opportunities to re-launch new fights to fix flawed legislation will easily occur. I do not agree.

I believe that it’s better to draw our lines in the sand and hold those lines! If we can’t produce public policies that benefit the people we most care about, then we should never put ourselves in the position of explaining why we didn’t win the fight for them or, even worse, why we abandoned them for an easier victory.

Third, we need to discuss how to get what we want. Women of color have fought to get a seat at policy tables for the past century. Often they have affected the discussions and outcomes. They have done so by not confusing access with influence, or influence with power.

© Favianna Rodriguez
A seat at the table does not guarantee the power to ensure that the priorities of women of color are shared by others at the table. A photo-op may look impressive in an organizational report, but unless we truly can bring quality and intersectional results home to our communities, why should they believe we are much different from those who have disappointed them in the past?

For this reason, I believe we have to be extremely strategic about bringing the grassroots folks we represent to the policy debates. The central question for me is not whether any organization (even my own, SisterSong, as much as I’d like to meet President Obama!) gets a representative seat in policy discussions. The more urgent question is whether we will continue to invest in our base building strategies so that when we get to the table we have the organized power of our constituencies at our back.

Too often, we are told that shortcuts are possible and necessary because community organizing and mobilizing is slow, painstaking and nebulous work, especially when we don’t have the backing of the corporate media or other levers of power, such as adequate funding. It may be tempting for our donors to urge us to engage in public policy debates, but not provide us with adequate resources to do base building and public policy work at the same time.

This has happened before to women of color organizations in which the policy work became the tail wagging the dog and resources to do community organizing are devalued over the more quantifiable and visible policy work. The potential outcome of such a division could be women of color representatives in Washington without a constituency that can be mobilized to bring our power to bear to support our allies and oppose our foes.


Keeping our vision front and center

Discussions of this sort truly reveal the transformative power of the reproductive justice framework for me.

At present, we have few platforms or policy vehicles capable of carrying our intersectional analysis and serving the people we prioritize. Not only is most legislation of the “single issue” variety, but the negotiations for even these limited bills usually end up lopping off the very people who most need the laws.

Can we envision violence against women legislation that protects women raped in prisons and ensures they have humane birth control, birthing and abortion services?

Can we picture an economic recovery that destigmatizes welfare and welcomes immigrants (legal or undocumented) to receive vital supports from the society they hold up with their labor?

With whom in power do we have these critical discussions who won’t dismiss us for asking for the “impossible”?

I don’t know the answers to these questions, but I’m sure of this: only a carefully thought-out approach will enable us to present our beliefs, wants and strategies to President Obama’s Administration. I do not expect that he will be able to give us everything we want and deserve. I am sure, however, that we certainly won’t get it if we don’t ask.

And that means drawing some lines in the sand and holding our president accountable. People like us who believed his message of hope and change were the ones who helped him get that seat of power. But he can’t deliver our dreams to us without mobilizing our power.
Posted by Julian Real at 12:40 AM

Great! My big thing is (each of has that thing that means something special to us in any movement, even though it's all equally important)...my big thing is that I REALLY want to see human rights activists and womens activists support women who need help to parent get be given the support they need to parent.

Single parenting is so prevailant, and it's not so much that I think we ned more $$ given to women, I think we need more programs that provide emotional support, creative ideas to foster love, communication and bonding in families, a fun environment to explore creativity. I want to see more family and community programs that enrich the lives of children and provide support to mom's.

(That was helpful for me to write, I haven't written it that way before!)

All of the goals listed here are magnificent!

Loretta Ross is, for me, a central figure in the socially engaged activism of those dealing with reproductive justice in the U.S.

I'm glad you appreciate and value her perspective and agendas.