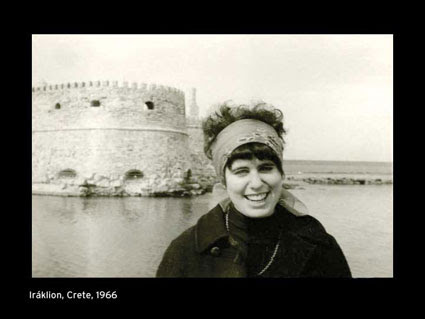 Please note: the piece of writing, which I adore, called "First Love", is linked to in the first sentence of Andrew Stafford's discussion of her work, just below. If you haven't yet read "First Love", now's your chance. It is amazing and so beautifully, powerfully written.

In Andrea Dworkin’s chapter “First Love” she writes about how concrete the world really is and how wrongly we are taught to live. She starts off by talking about the world and how fragile it is, and of all the horrors that lie within it. She then goes on to depict her love for literature and art and how she wants to be an author some day. This is important because she says that books and art are not to be analyzed or memorized, like we are taught, but to be lived through their emotions and meanings. That literature is a conversation through time, from one author to the next.

I personally like these early points that she makes because I believe that in the world we live in seldom do people look at the world like this. In school we are taught to read a book and take notes on the important parts, to memorize what is happening so we can pass the quizzes and tests that are sure to come on this subject. We do not look at the messages of the things we learn, or the beauty of art, we only do what is necessary to get by with a good grade. But Dworkin talks about really seeing the world and enjoying it for what it is.

The chapter then goes on to talk about her relationship with a man in Greece when she was merely a teenager. She tells of how he was her first love and how she can still see his face today burned into her brain. Even when she was married to another man several years later she still dreamt of this man that she only refers to as E, but Dworkin was forced to leave E because of his dominance and oppression that he applied to her. Dworkin was a very sexually active kid and when she met E they immediately fell in love, they both seemed to love culture, nature, and sex. She was a 19 year old American living in Greece with him and they loved each other. Dworkin decided that she did not want to be just a house mom, so she began to write stories and poetry. This posed a threat to E however as her love for literature and art seemed to interfere with his idea of her love for him. They began fighting over this issue, at first with words and later with violence. He raped her multiple times and tore her rectum, stating that if she truly loved him it was her job to accept this painful sex, and that she must “take it.” So she did. As this went on however she began to resent him and eventually would no longer put up with it. She had to choose between being nothing and accepting her lover, or leaving him and being the writer and poet that she dreamed of being. This was not an easy choice for Dworkin as she explains that she truly did love him and even still does today. But she chose to be separated for a while and to move on without him. Their love was to much however and after a short time they returned to one another, however, while Dworkin was away E had contracted gonorrhea from a young Greek man and gave it Dworkin upon her return. So in the following weeks Dworkin left him for good, not because of the rape or the sexually transmitted disease she explains, but as she put it her “drive to become.” She could not put up with his non-acceptance of her wanting to be more than just a women, she needed to be a successful writer and philosopher, so she chose the other life. This is what truly drove her away because as a youth in America she had suffered many horrible relationships and was even abused in an American jail by two doctors. Her love of literature is what drove her to become a writer so she could voice her hardships and her love for the world and for nature. But E could not accept this and she was driven away from him. Dworkin wrote that she thought the pain from being away from him was going to literally kill her and that this physical pain was with her at all times, and she even feels it sometimes today.

This of course is a fictional story told by Dworkin, but puts across a very serious message. That no matter how binding a love might be, if it is not right than you must move on. Love can be painful in many ways, but the physical pain she received from her man was to much to bear for her. This combined with the fact that he would not accept her drive for something more overcame her love for E and forced her to leave. Obviously I think that if any women is in a abusive relationship than they should get out of it, but the real message is that a relationship can be abusive in more than a physical way. If someone is unwilling to accept who you are and who you want to be, it can be just as bad as if he is physically oppressive.
Andrew Stafford
9:51 AM


I also really liked, and fully agreed, with those early points Dworkin makes about the world and how wrongly we are taught to live. It is sooooo true that school teaches us to read a book, take notes on the important stuff, memorize that stuff so we will be able to pass the test and come out of the class with a good grade. That isn't learning at all! That is just teaching us to be puppets of the system. It makes me sick. Sometimes I feel like a hypocrite for being in school, because the current mode of education in America (teaching us to be puppets of the system, preparing us for jobs and careers) is everything that I stand against. I will not be a puppet, a pawn of the bureaucracy that is America. But then again, that is why I am studying philosophy. I have no idea what "I'm going to do with my degree." And frankly I don't care. I love philosophy, just as Dworkin loves literature and art. And the love I feel for philosophy (among many many other things) is what I'm going to do with my life. I also wanted to agree with your last paragraph; love can be oppressive and harmful in other ways than just physical. I think a big part of Love as Freedom is acceptance. If she loves literature and art, let her love literature and art! Attempts to change someone because one does not like the things (s)he is interested in is not love at all. Dworkin's story in First Love is a great example of this. I think that part of Love as Freedom means total acceptance of who the other person is, with no desire to change any part of that person. Love as Freedom (partly) means loving someone exactly as they are.
March 11, 2010 12:17 PM
Posted by Julian Real at 11:33 PM