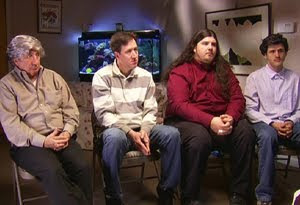 [image of white heterosexual male rapers and molesters of girls is from *here*]
***TRIGGER WARNING***: THIS MATERIAL MAY DEEPLY TRIGGER ANY SURVIVORS OF RAPE OR CHILD SEXUAL ASSAULT OR OTHER FORMS OF SEXUAL ABUSE BY ADULTS OR RELATIVES.

Oprah's Conversation with Child Molesters: beyond what you saw on television today, if you watched. What follows is from www.oprah.com/oprahshow/Oprahs-Conversation-with-Child-Molesters*.

The Oprah Winfrey Show  |
February 08, 2010
She calls it the most honest conversation she's ever had with sex offenders. Oprah sits down with four admitted child molesters for a frank, graphic discussion of their crimes. Watch the two-hour conversation in its entirety—an Oprah.com exclusive.

4 things you need to know about child molestation

Are you a victim of sexual abuse?

If you or someone you know is a victim of sexual abuse, call the National Sexual Assault Hotline at 1-800-656-HOPE
Find out more from the National Center for Missing & Exploited Children

*     *     *
Did anyone else watch Oprah today? It featured interviews with four white het male abusers of children. All the victims were girls. Most were family members, including daughter and granddaughter.


These are normal men speaking out about something normal het white men do every day somewhere. Every day. Somewhere. Other men, and a few women, also do this--molest, assault, violate children, sometimes their own. With men, the victims are most often their own daughters or nieces or granddaughters or younger sisters or female cousins. Most often.

What this program demonstrates is how patriarchal atrocities happen because men are dishonest with one another, and do not stop each other from harming children. We do not prevent harmful access to children, and increasingly, laws are put in place that make perpetrating father's access "a right", that is not in the best interest of the child. The child's right to not be violated is violated by laws men work to get passed to have access to children, partly in order to violate them.

This means that it is not the stranger in the car offering candy we have to worry about MOST. We MOST have to worry about and stop the father, grandfather, uncle, male cousin, or brother. That's who must be stopped from having access to girls. Less access is needed. So who are the groups fighting for MORE ACCESS? And I have to wonder: who will benefit from this expansion of "rights of access to violate one's children"?

Here at A.R.P., comments about this show are welcome from anyone who reads and abides by the comments policy (see top right of main page).
Posted by Julian Real at 2:31 AM