How to Speak Truth to Oppressive Institutional Power: the case of Kevin Annett and the Canadian Church 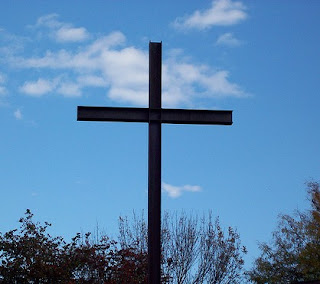 [image of steel cross is from *here*]

Hidden from History:
The Canadian Holocaust

An Open Letter to Brian Thorpe, Head Officer of the United Church of Canada

In March, 1997, I was expelled from my livelihood as an ordained minister in your church because of public allegations I made concerning the murder of native children and other criminal acts by staff at your Port Alberni "Indian residential school".

Until yesterday, you and your church vehemently denied that such crimes occurred in these schools. But now that eyewitnesses to these murders have spoken out on national television, on CTV's "First Story" program on April 27, you have quickly reversed your position and stated on air,

"We know that criminal acts occurred in the residential schools ... anything is possible."

I feel personally grateful that you have finally exonerated me by this acknowledgment of the criminal actions and liability of your church. I therefore look forward to a full and public apology by you - as one of the officials who arranged my firing without cause and expulsion from ministry - for the wrongs done by you to my family and I, including your years-long campaign to discredit and libel me for claiming what you yourself have finally acknowledged.

Beyond this, however, your admission of guilt requires that you now respond to the Diplomatic Summons issued to you by a United Nations body, IHRAAM, on May 22, 1998 - a Summons you ignored - which required that you testify before a War Crimes Tribunal concerning the criminal acts which you have now acknowledged occurred in your church's residential schools.

Accordingly, as the former Advisor to this Tribunal, I demand that you publicly answer these questions which were to be asked of you at the IHRAAM War Crimes Tribunal:

1. Did your church plan and perpetrate the planned extermination of non-Christian aboriginal peoples in league with the Canadian state, including through the deliberate exposure of native children to tuberculosis, sexual sterilisation programs, land theft, murder, torture, and other acts designed to destroy native lives and culture?

2. Did more than 50,000 children die as a direct result of these actions by your church, and the Catholics and Anglicans, as government records indicate?

3. Do you acknowledge that your church has engaged in deliberate and joint cover-up of these crimes with the federal government since at least 1960, as your own lawyer Mr. Hinkson admitted in a Nanaimo court room in October, 1998? (The Province, October 27, 1998)

4. Did you, without my knowledge or permission, and with the encouragement of church lawyer Jon Jessiman, take personal documents of mine out of my briefcase at a Vancouver press conference on September 3, 1997 -documents which proved the legal liability of your church for crimes at the Alberni residential school? Are you aware that your and Mr. Jessiman's action was recorded by a Cable 4 TV crew?

5. Do you have any knowledge of a native pedophile ring which operates out of The Vancouver Club and originated in your Alberni residential school, and which involves senior United Church lawyers and officers who are associated with you?

6. Did you pay members of the Ahousat band council over $7,000 to disassociate themselves from myself and Chief Earl George after we had discovered and made public that your church had illegally sold ancestral land of the Ahousats to persons associated with your church's corporate benefactor, the logging company MacMillan-Bloedel?

7. As Chief Officer of the United Church in BC in 1995, did you order or have knowledge of the destruction of records from the R.W. Large Memorial Hospital in Bella Bella, B.C., which documented the sterilisation of thousands of non-Christian native men and women by your church's medical missionary, Dr. George Darby sr., between 1923 and 1962?

8. Why did you personally arrange the "de-listing" trial that expelled me from my livelihood in United Church ministry after having stated in writing to me in September, 1995, "There are no charges against you"?

9. Why is your church exonerating and publicly defending convicted serial rapists in your ranks, such as "Reverend" Russell Crossley of Victoria?

10. As a fiduciary officer of the United Church of Canada, are you willing to surrender all information and evidence in the possession of your church pertaining to any criminal and genocidal acts and intentions by the United Church towards aboriginal people in Canada?

11. Will your church surrender itself and those guilty of genocide and other criminal acts to the International Court of Justice and the International Criminal Court, for having committed all five definitions of "genocide" contained in the U.N. Convention on Genocide which the Canadian government ratified in 1952?

12. Why should Canadian taxpayers continue to subsidize your church through allowing it a tax-free charitable status when it, and its officers, have engaged and are engaging in such crimes, cover-ups, lies, and Genocidal acts?

The world awaits your public reply.