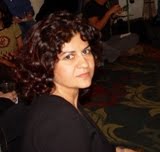 [image of Yanar Mohammed is from here]

[Source for what follows is here: here]


Yanar Mohammed: Thank you Hillary for submitting to our patriarchs

In a visit to Egypt which was meant to be a landmark in US-Arab relations, Hillary Clinton chose to have her head covered with a veil, thus forwarding a clear message to more than a hundred million Arab women: "if an American Secretary of State can wear it, it should be okay for you too."

Women of the Arab world and the Middle East suffered and struggled from patriarchal Islamist oppression which escalated in the last two decades. One simple example of the oppression is the excluding of females from all decision making positions as they are thought of as "emotional" and "irrational". Therefore, a woman cannot be a judge in court; neither can she be a full witness, as two women's testimony will be equal to one man. Other examples of the oppression travel around the world dressed in full black, with no openings, even for breathing.

In a total control of governmental and non-governmental mass media, Islamist ideologists brainwashed generations into the idea that females are deficient human beings with an evil urge to disgrace and dishonour. Therefore, they should be restricted into a narrow zone lest they bring shame and filth upon the innocent unsuspecting patriarchs at home. The same ideologists who hold the binding veil in one hand, hold another unreserved banner in the other hand which assures the males' biological need for more than one sexual partner and tries to polish legalized polygamy with baloney testimonies of "'...being fair among wives when it is too difficult".

None of these misogynist ideologists mention the human catastrophe which befalls the female and children population in an Islamist city. In the religious city of Najaf , south of Baghdad 20% of the adult female population are abandoned wives with no income. They are second, third and fourth wives of men who had taken off for other women. Their husbands do not care to divorce them or to spend on their wives and their children. In the "holy" city of Najaf , masses of destitute women and children roam in the streets and may manage to live off the charity of religious institutions which had justified their abandonment and poverty in the first place.

The Islamist ideologists do not feel compelled to justify the tragedy of tens of thousands of women and children of a polygamist culture. They continue to pump a woman serves man ideology to the young generations to perpetuate the males' misogynist practices and the females' submission to misogyny as part of faithfulness and godliness.

There was a time of progressive leftist change in the Arab and Middle Eastern societies. It coincided with a world-wide movement for liberation from colonialism. Our mothers' generation benefited from that age as they reached to the university seats and became doctors and engineers.

Still, it took many years of political and feminist struggle to get rid of the veil and the control of patriarchs who imposed the veil on them. As you may know Hillary, these women were not born with the veil. It always takes a misogynist patriarch to tie it around your head and neck. But these women gracefully succeeded and got rid of the veil, the symbol of their oppression. From thereon came the female Ministers, judges, scientists, doctors, and engineers.

Hillary ...
We are proud of our bodies and do not need to cover them to please your allies, the Islamist patriarchs. We also know that our fight for women's rights needs to parallel with a fight to end the US occupation in Iraq , as we have only witnessed deterioration in our lives and social status since day one of the occupation. Thanks to you and others like you, the Islamist patriarchs are ruling as government and militias in Iraq now. We know that women of Iraq cannot dream of a day of freedom as long as the US troops are in here.

If you need to flirt with your Islamist patriarch allies, go ahead. But never dare speak in the name of women and women's rights. Stick with the patriarchs in the boy's club as it serves you better.