Where are The Heroic Men Protesting the release of Brian Warner's Murderous Misogynist Video?

BOYCOTT ALL MARILYN MANSON MATERIAL. DO NOT BUY HIS MUSIC OR ANYTHING ELSE ASSOCIATED WITH HIM, ESPECIALLY ANYTHING HE PROFITS FROM. 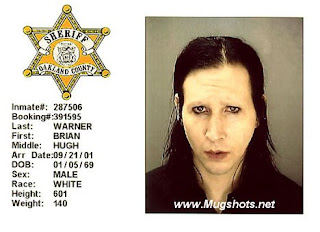 His fucked up video does NOT appear below and is not directly linked to at A.R.P. His language is enough for the reader to understand where he's coming from. One place he's coming from is corporate desperation--he's an pseudo-iconic has-been who should just stop making music. Period. And he's a misogynist prick.

"This record is more about, ‘If you say you’ll be with me until I die and then you change your mind, you should run very fast. Because I’ll kill you.’" -- Marilyn (Brian Warner) Manson

Two feminist blogposts have alerted me to the latest activities of Brian Warner, better known to the Western pop public as Marilyn Manson. His latest music video shows him beating and killing a woman.

So where's the outrage, fellas? Where's the call for a boycott?, the blogging by men who claim to give a shit about women, the MySpace group organised to challenge Mr. Warner/Manson?

When yet another man makes it seem like ALL men are evil where are the men calling his behavior unacceptable and horrific (and not in a good way)? I know all men aren't evil. And I know almost all men are cowards when it comes to calling out other men, and organising against their overtly woman-hating/male supremacist activities.


JENNIFER DREW has the analysis in a comment I've copied from the post titled "I'm really sick of this shit" (which I link to below):

Men such as Steve Wright and others whose names I am not going to name but remember the man who abducted and committed multiple rapes against an 11 year old girl. Then remember the man who supposedly couldn’t get any woman to notice him – what did he do? Why he murdered women who didn’t even know he existed.

There are innumerable other men including one man who murdered his wife because ’she provoked him!’ All all these men and I include Josef Fritzl are supposedly individual cases which have no bearing whatsoever on our misogynistic and women-hating society.

Denial that men are accountable for their actions towards women because guess what? It is women’s fault for not preventing male sexual violence committed against them and it is women’s fault for daring to imbibe any alcohol which of course ’causes respectable men’ to rape them, since women who drink alcohol ‘provoke men’s supposedly insatiable sexual desires.’

Back to denial again and look who are the ones denying it – why it is men of course.

Manson’s video is not ‘edgy’ it is not unique it is not intelligent – but what it certainly is is profiting by portraying women as dehumanised sexualised commodities who can be beaten and then murdered by men because guess what? Women aren’t human, they have no feelings or emotions but what they do have apparently is ’sexualised masochism’ because women want to be beaten and raped and subjected to horrific male sexualised sadistic acts.’

All lies of course but you wouldn’t know this given the male-dominated and male-controlled media is obsessed with male sexual violence against women because it ‘entertains men’ and ‘tells men they are human and therefore entitled to be treated with dignity and respect whereas women and girls are non-human and any male act of sexualised cruelty is not cruelty – just male entertainment!

Do men see it? Most do not because guess what? Such violence is not inflicted on men it is men committing such violence against women and since men are not being beaten or subjected to sadistic sexualised violence by women it doesn’t matter – it is irrelevant.

The liberal to progressive blogs and sites by men criticising Marilyn Manson, and all media misogyny are, well, virtually non-existent. Wait! Here's one: http://www.craveonline.com/entertainment/music/article/did-marilyn-manson-beat-his-ex-girlfriend-to-death-89837
Posted by Julian Real at 12:21 PM