Thoughts for the Day: Three of Derrick Jensen's Premises of Civilisation 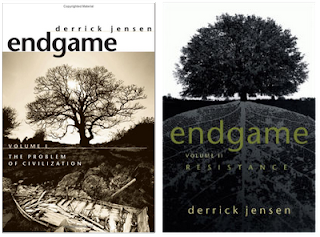 [images are from here]

What follows if from the first book above and from this web page. If these premises are true, what does it mean to act "responsibly" and "humanely"?


Premise Three: Our way of living—industrial civilization—is based on, requires, and would collapse very quickly without persistent and widespread violence.

Premise Four: Civilization is based on a clearly defined and widely accepted yet often unarticulated hierarchy. Violence done by those higher on the hierarchy to those lower is nearly always invisible, that is, unnoticed. When it is noticed, it is fully rationalized. Violence done by those lower on the hierarchy to those higher is unthinkable, and when it does occur is regarded with shock, horror, and the fetishization of the victims.