The Adolph Award (for White Heterosexual Male Supremacist Insanity and Delusional Behavior) goes this month to...

1 JAN. 2010 UPDATE: Rick Flashman has contacted me stating the information I found online  about him is false and was posted by an impostor. I await hearing back from him with more information on how and when this happened, and by whom. So let's press pause on naming the recipient of this award for now. I'll find some of the other candidates, who clearly speak in their own names about themselves. Sincere apologies to Rick Flashman, and again, I look forward to hearing back from him with more information about who made those initial connections. Consider them FALSE here until further notice. 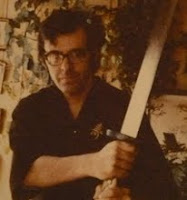 Rick Flashman, who considers Marc Lepine some form of "masculist" hero. (Note: the link on Marc's name above takes you to detailed information about him committing his overtly antifeminist and gynocidal atrocity at a university in Montreal, Canada on 6 December 1989, ECD.)

Perhaps a small replica of Rick should just be dipped in bronze. And then we could replicate his bronzed mini-being as "The Adolph Award"!

There were so many runner's up this month. So many contenders for this award. Too many, in fact, to give a dishonorable mention to each of them here. There will likely always be too many contenders for this award, of course, until such time that racist heterosexist patriarchies die of their own foul immorality, political crimes, and intellectual stench.

It's this quote and graphic that brought Rick Flashman [someone, an as yet unidentified coward] the first ever Adolph Award: 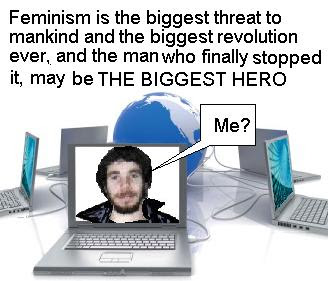 Below, I'm just showing you the date and title of Rick's [someone's] stupid-ass absurd piece of writing that goes with the graphic above. Need he say or do any more to deserve this award? Not in the estimation of this year's millions of voters.

MARC LEPINE: HE DID IT OUT OF LOVE