Analysing the murder of Stephen Johns at the Nazi Holocaust Museum: on race, rape, and reality in the United States 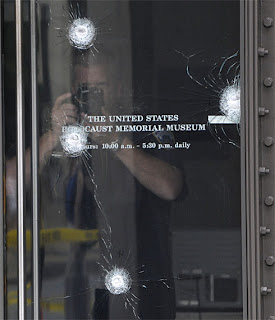 [An investigator photographs bullet holes in the door of the Holocaust Museum in D.C. Thursday, a day after a security guard was shot and killed there. The image is from here and is credited to H. Darr Beiser, USA TODAY]

A message of "be terrified" was sent, loud and clear, to anyone who isn't the kind of white that white nationalists fancy themselves to be. Somehow, using a racial identity, white nationalists--who do not belong at all to this nation (one stolen from the many nations of Indigenous people here), construct reasons to hate and target not only African Americans and white Jews, but also Latin@s and Arab Jews and Muslims, as well as those U.S. citizens of East and South Asian descent. Never mind that many people who are those ethnicities appear white. But it is not only "non-whites" that many white nationalists despise and seek to destroy. On their top 'ten most hated groups' list is also female and male "homosexuals". How being lesbian or gay somehow makes someone less white is a bit of a ethnographic and political mystery to me. One in a series of mysteries.

White nationalists have bizarrely managed to identify the Nazi Holocaust as a fiction for decades. Taking aim at a museum dedicated to preserving the evidence of that particular mid-20th century genocidal atrocity in Europe must make it very difficult to formulate an argument for "the [Nazi] Holocaust Myth". It appears one of the strategies of white nationalists is to get rid of the evidence.

In the most recent effort in the U.S. which made national news, a white nationalist named James von Brunn was greeted at the museum by an African American man named Stephen Johns. I heard that Stephen's last act was actually to try and assist von Brunn, a visibly quite elderly man making his way into the museum. Mr. von Brunn expressed his displeasure at this meeting by mercilessly killing Mr. Johns.

I am pissed at the way the white male-dominated media are covering Stephen Johns' death. Coded racist language is being tossed around as if this were the appropriate way to speak of someone murdered by a political assassin whose terroristic views and actions have targeted at Blacks, Jewish or not, for decades. The underlying message to the white supremacist public is this: You can rest assured this victim was truly victimised. He wasn't one of those thuggy, perennially angry Black men; he was 'a gentle giant'.

And if he wasn't 'a gentle giant' would his death be any more sorrowful or egregious to normal white male supremacist Amerikkka? Yes, that term is used for people, regardless of race, who are tall, large-framed, and expressively kind-hearted. And in no way do I want to diminish the degree to which Stephen Johns stood as an example, a role model, for how to be a humane being. But there's a way of incessantly identifying him not dangerous is in the same racist category of noting that the Obamas are able to enunciate words in ways white middle class folks find resonant with their own ways of articulating English. As if this should come as some surprise? "Wait? You mean this Black security guard was gentle?? Oh, then his death is a real shame." Some of the ways that his life has been discussed this past week in terms of whether or not he was a father is also disturbingly racist to me. It appears biographical sketches of this murder victim are keen on noting the ways he was and was not like the stereotype--and I do mean stereotype--of the upstanding white heterosexual man.

Also, any white nationalist or white separatist being understood as 'a nut' makes no sense when the murder of Black, Red, and Brown people locally and worldwide is what made and makes the U.S. country allegedly "great". Those of us with inherited money from white relatives who have lived for at least two generations in the U.S., those of us who are white who live on land once inhabited solely by the Indigenous people of Turtle Island, those of us who own stock funds, those who want and purchase diamonds as well as anything else that is made with a petroleum/carbon base, are also murdering Black, Red, and Brown people, by proxy.

It is a common tactic of the dominant media to extract the "extremist" and psychologise him ad nauseam rather than analyse his unfortunately useful function in a normally terroristic white male supremacist state. His function is to make those white nationalists and separatists who haven't murdered anyone publicly seem "harmless" by comparison. As if there's ever been anything harmless about white male supremacist ideology and practices. Focusing in on white nationalists also has a function, to the degrees that it is done by media. Undo focus on them as the white supremacists functions to invisibilise white male supremacy as the law of the land misnamed the United States. In this case I'll give some national media credit for noting his long-time associations with many other white nationalist, militant, and terroristic groups, for not portraying him as "a loner". Of course plenty of other press did that. But the media failed miserably at noting how he is a product of the law of this land, not an unlawful aberration to it. In my lifetime, I can recall maybe a dozen murderous "white supremacists" who have been named as such by the dominant media. Dick Cheney is not among them. Why is that?

How many men have been named "virulent male supremacists" by the dominant media? None I know of. Meanwhile the ever-expanding cases of exploitation, harassment, assault, and murder of girls and women by men pile up to the moon. Rape is not considered a "hate crime" in many cities not because anyone thinks misogyny is not a factor, but rather because there are so many rapes and there are too few resources dedicated to eradicating hate crimes. To add "the rape of women and girls, trans people, and 'effeminate' men by men" to the list of actionable hate crimes isn't "feasible" even while, often enough, it is accurate. I understand rape to be generated by many factors, structural as well as psychologically political, hatred being among them but the only motivator. Many men, for example, are taught by pornographers that coercion and force is what all women want. This category of rapists may actually--if also self-servingly, harmfully, and oppressively--decide to think they are 'pleasing her' when in fact, if and when she remains silent, that silence in the face of his coercion and force may be the loudest statement of protest she can muster. And, of course, some women fight to get the seriously misinformed male "lover" away from her body and out of her life.

I reflect on how many Black men and women I have seen the white media's cameras focus their lenses on as "the dangerous element" in our society. I contemplate how many Black men are "pulled over" by cops for illegitimate reasons having only to do with racist profiling, all the Black and Brown people who are followed around in stores by nervous store clerks, who have been cautioned to do so by their corporate superiors, and/or all the Black, Red, and Brown men and women who have been wrongly imprisoned or given extraordinarily long sentences for things white men do with impunity, sometimes with multi-million dollar end-of-year bonuses.

This past week, the most news-worthy (therefore visible) white male supremacist murdered someone he deemed to be not as worthy of life as he is, due to race, and being an obstacle. When the dominant media identify such a person primarily as "a nut" we are forgetting what the function is of any armed and militant "extremist" individual or group that routinely uses murder or virulently acted out bigotry against those who are oppressed as a strategy for maintaining their structurally stable supremacist power.

Note to MRAs: in the actual social world this wouldn't have anything at all to do with those female people who you are so fond of calling "feminazis". And if you white Men's Right's folks do, in fact, oppose "militancy" and "extremism" and bigotry I'm sure you're organising, posting, and putting up just as much of a fuss over all the white and male supremacist organisations and individuals as you are about non-murderous, pro-liberation people like Mary Daly and Robin Morgan, right? The death toll of men who have been lethally assaulted or otherwise murdered by "extremist" feminists is how many, exactly? Oh, right; that would be none. And how many of those [non-existent] deaths or assaults function to generate terror in an entire class of people? Perhaps you are getting the idea, but I won't count on it.

All of this is to say that the U.S.'s domestic and foreign economic policies would also have to be outed as, "nutty"... unless we're willing to call them what they actually are: gynocidal and genocidal. Indeed, investment firms like Fidelity have had to vote on whether to divest in companies that obviously contribute to genocide. As if that should be a question that needs debating or a vote in order to arrive at a humane, "rational" answer.

Finally, I am aware that anti-Semitism is increasing in this country that is not rightfully mine. In the eyes and gun-scopes of a white heterosexual Christian-identified (or anti-Christian) male supremacist terrorist, any white Jew or Jew of color magically becomes decidedly more dangerous simply by being Jewish.

I hope that the living victims and survivors of this form of global cultural and political imperialism will find ways to work together to confront and radically transform the power structures, including the acts of racist, anti-Semitic, anti-Muslim, anti-Indigenist, heterosexist, and misogynist individuals, that comprise the on-going deadly reality of white male supremacy.

Beware of reports such as this, which equate "anti-Semitic beliefs" among some groups of color with terrorist activities and groups. To do so is utterly racist and another in a series of practices designed to ignore the white male elephant in the room. Many of us, including Jews, hold some of the form of anti-Semitism, but in the U.S., primarily white Christian-identified men genocidally exercise their brand of it.

James von Brunn, 88, was also called a "gunman" which is a term the dominant media cannot get out of its press. The term exists to romanticise and glorify murder and murderers. This particular assassin has also been identified in the press as "a frustrated artist and an angry man". Those particular terms, in case you have forgotten, are used repeatedly to describe Adolph Hitler. But in case anyone is confused, von Brunn was no Hitler.

And no feminist has ever been a Nazi.