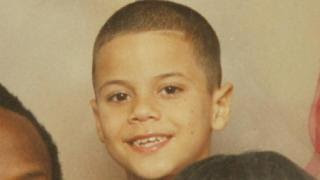 [image of Jaheem Herrera, from here]

As is the case with all forms of sexual violence, anti-gay bullying is one of those atrocities that generally goes unrecognised and remains unremarkable. To acknowledge and honor each and every victim and survivor, every incident of sexual or heterosexual male supremacist violence, including those who commit suicide after enduring it: how many blog posts would that take?

Rather than repeat here what another gay man has already expressed and reported on, I'll link to Living Out Loud with Darian's blog post on this boy's life and death.

My heart goes out to Jaheem's family and friends, with a special wish for healing to his ten year old sister, Yerralis, who discovered Jaheem’s dead body.
END OF POST.
Posted by Julian Real at 6:04 PM