To U.S. Male Soldiers: There's Not a Goddamned Thing that's "Heroic" about Your Rape of Women 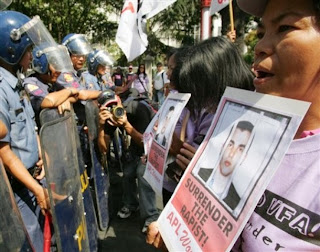 [The above image is from here]

I have been aware of this under-reported form of sexual subordination and terrorism of women for some time. As is obviously the case, men in and outside of the U.S.'s "armed forces" rape systematically and do so with the knowledge and complicity of other men. U.S. male soldiers, if overseas, rape as part of a practice of overall aggression and domination of various places around the world, almost always "of color". That the U.S. is a virulently racist-misogynist State I think need not even be seriously debated.

What has been turning up in the news, from time to time are incidents and accounts of U.S. male soldiers rapes of U.S. female soldiers. Given the more highly ranked rapists' support of and participation in this atrocity, I conclude that such rape is both normal and culturally condoned in all branches of the U.S. military.

If only media could connect a few dots: militarism, misogyny, racism, capitalism, and colonialism are all parts of a whole, and that whole is Western white male supremacist society's assault against the rest of the world, particularly and in especially horrendous forms, against women for being female.

Here's an article on this subject.

Below is the text:

I had a conversation several weeks ago with a former Army officer, a woman, who had been attacked in her bed a few years ago by a superior officer, a man, who was intent on raping her.

The woman fought the man off with a fury. When she tried to press charges against him, she was told that she should let the matter drop because she hadn’t been hurt. When she persisted, battalion officials threatened to bring charges against her.

“They were talking about charging me with assault,” she said, her voice still tinged with anger and a sense of disbelief. “I’m no longer in the Army,” she added dryly.

Tia Christopher, a 27-year-old woman who lives in California and works with victims of sexual assault in the military, told me about the time that she was raped when she was in the Navy. She was attacked by another sailor who had come into her room in the barracks.

“He was very rough,” she said. “The girls next door heard my head hitting the wall, and he made quite a mess. When he left, he told me that he’d pray for me and that he still thought I was pretty.”

Ms. Christopher left the Navy. As she put it: “My military career ended. My assailant’s didn’t.”

Rape and other forms of sexual assault against women is the great shame of the U.S. armed forces, and there is no evidence that this ghastly problem, kept out of sight as much as possible, is diminishing.

New data released by the Pentagon showed an almost 9 percent increase in the number of sexual assaults reported in the last fiscal year — 2,923 — and a 25 percent increase in such assaults reported by women serving in Iraq and Afghanistan. Try to imagine how bizarre it is that women in American uniforms who are enduring all the stresses related to serving in a combat zone have to also worry about defending themselves against rapists wearing the same uniform and lining up in formation right beside them.

The truly chilling fact is that, as the Pentagon readily admits, the overwhelming majority of rapes that occur in the military go unreported, perhaps as many as 80 percent. And most of the men accused of attacking women receive little or no punishment. The military’s record of prosecuting rapists is not just lousy, it’s atrocious.

Louise Slaughter, a Democratic congresswoman from upstate New York, said: “I know of women victims, women in the military, who said to me that the first response they would get if they tried to report a rape was, ‘Oh, you don’t want to ruin that young man’s career, do you?’ ”

Ms. Slaughter has been trying for many years to get the military to really crack down on these crimes. “Very, very few cases result in court-martials,” she said, “and there are not that many that are even adjudicated.”

The Department of Defense has taken a peculiarly optimistic view of the increase in the number of reported sexual attacks. The most recent data is contained in the annual report that the department is required to submit to Congress. The report says that “the overall increase in reports of sexual assault in the military is encouraging,” and goes on to explain:

How’s that for viewing hideous statistics through rose-colored glasses? If the number of reported cases of rape goes sky-high over the next fiscal year, that will mean that the military is doing an even better job!

The military is one of the most highly controlled environments imaginable. When there are rules that the Pentagon absolutely wants followed, they are rigidly enforced by the chain of command. Violations are not tolerated. The military could bring about a radical reduction in the number of rapes and other forms of sexual assault if it wanted to, and it could radically improve the overall treatment of women in the armed forces.

There is no real desire in the military to modify this aspect of its culture. It is an ultra-macho environment in which the overwhelming tendency has been to see all women — civilian and military, young and old, American and foreign — solely as sexual objects.

Real change, drastic change, will have to be imposed from outside the military. It will not come from within.
END OF POST.
Posted by Julian Real at 9:26 PM