Thank you, Johann Hari. Yeah, what she said... Why DO we ignore the horrible abuse of women that "great" men commit?


This is a cross-post from The Independent (UK). You may click on the title below to link back.


Johann Hari: Why do we ignore the abuse of women?

The photograph above is not the one making the news. It appears to be a moment where ol' Adolph is catching a few zzzz's while not attending to his genocidal agenda to wipe Jews from Europe and beyond--if only there had been no Resistance. Who knew Adolph and Eva also had fun with anti-Black racist drag?

Quiz: How many forms of gross exploitation, sexual, ethnic, and racist insensitivity and inhumanity, and genocidal heinousness are wrapped up in this smallish news story?

Please click on the title below to link back.

A collection of photographs of Adolf Hitler's lover Eva Braun has surfaced, and in one of them she is featured with black make-up and dressed like a man.

The picture had been taken in 1937 when Braun was 25, and she had captioned the image "Me as Al Jolson". Jolson was a Jewish American star, the Sun reported.

The images had been found in 1945 at Hitler's Bavarian mountain retreat, the Berghof, but they lay forgotten in US archives until this week.

Other snaps show Hitler playing with the young daughter of one of Braun's pals, and messing about with her pet dogs.

Posted by Julian Real at 6:42 PM No comments:

Feminist Event: When is "War" and "Terrorism" neither? Here's one answer.

Bob Egelko, Chronicle Staff Writer
San Francisco Chronicle March 24, 2011 04:00 AM Copyright San Francisco Chronicle. All rights reserved. This material may not be published, broadcast, rewritten or redistributed.
A prominent Afghan feminist and war critic was granted a visa to enter the United States on Thursday - by the same State Department office that turned her down last week - and belatedly started on a speaking tour that is scheduled to wind up in San Francisco.

The case of Malalai Joya is the latest of several in which the Obama administration, after at first refusing entry, has allowed a visit by a foreigner who has criticized policies of the United States or its allies.

I am compelled to ask: how are men's wars against each other not part of men's war against women? The elements are all the same, no? Terrorism, domination, invasion, violence, horror, devastation. What's the difference? Oh, men's war against women is often also set up to appear completely normal and non-violent. Institutional. Interpersonal on the most intimate relational levels. Made to seem as though we have nothing to worry about behind the curtain, or under the sheets. And, yes, it's privatised in a way that men's warfare against other men is publicised--even while erroneously reported about by corporate media. When is terror and invasion seen as neither terrorising or invasive? When it is only men only doing each of those only to women. Then it's just "life". Then it's only "love", not ever war.

What follows this paragraph, is from *here*.

Upcoming Colloquium Will Focus on Impact of War on Women Worldwide 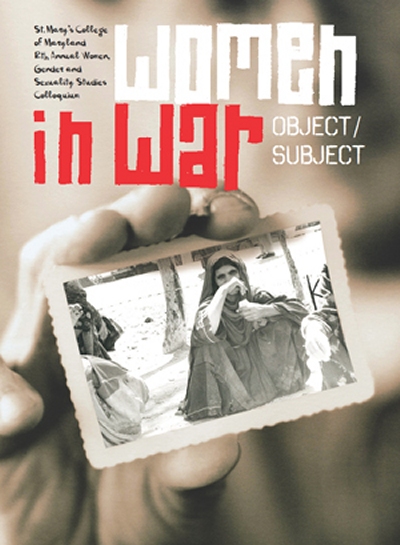 ST. MARY’S CITY, Md. (March 13, 2011) — When we think of how women's lives have been affected by wars in the course of human history, we often think of them as those left behind. Today, however, they fight on the frontlines, are used as weapons, and live as refugees. This year’s 12th annual Women, Gender, and Sexuality Studies Colloquium at St. Mary’s College of Maryland March 22-24 will focus on women as participants in, victims of, and rationales for war.

“Women in War: Object/Subject” will include a photo exhibit of Iraqi refugees, and presentations on Palestinian women living in Israel and women in early American warfare. Malalai Joya, an Afghan politician who was suspended from the Parliament because of her comments, also will be here. Her book, A Woman Among Warlords, comes out in paperback this March; Time magazine named her in its 2010 list of the 100 most influential people in the world. For more information on the colloquium, go to www.smcm.edu/wgsx/annual_colloquium/.

Supported by the Alice McLellan Birney Women Studies Fund, as well as community and college members, the colloquium each spring focuses on a topic critical to the lives of women. It has previously covered subjects as diverse as women in the workforce (2009), marriage in America (2007), and women and technology (2002).

“A Woman Among Warlords: The Extraordinary Story of an Afghan Who Dared to Raise Her Voice”—8:15 p.m., March 24, Cole Cinema. Malalai Joya, Afghan politician, teacher, and author. Reception and book signing to follow—Aldom Lounge, Campus Center.

Women, especially, have been protesting against the use of nuclear power for decades, including in Japan. Alas, men won't listen to women, internationally. And I'm not talking about a single Chancellor or a Secretary of State, either. I'm speaking about listening to women who do not hold political office. I'm not talking about listening only to women and men with race and class privilege who promote concepts like "sex work" in societies where there is trafficking and sexual slavery and mass rape, all of which are required for "sex work" to happen at all. I'm speaking about the women who know what's happening to the most disenfranchised and assaulted women and girls on Earth because they ARE those disenfranchised and assaulted women. These women's voices may be heard by clicking to some of the blogs in my blog roll and by accessing the important web pages section, linked to on the right side of this page.

Patriarchal men, not because of biology, not because of hormones, not because of genetics, are incapable of producing humane civilisations. How much more evidence do you need, really? How many more wars? How many more systems of gross exploitation of girls and women? How many more men battering women and getting custody of their children if the women leave? How many more Black, Brown, Asian, and Indigenous women disappearing and being raped and killed but getting no media attention or collective outrage from the media and viewers? How much more racist-misogynist capitalism? How many more women have to be oppressed, subordinated, and enslaved to men before we collectively WAKE THE FUCK UP and stop patriarchal societies from ruling? Connect the dots of blood, the missing people, and the cancer tumors. Trust capitalist-patriarchs, and their apologists and defenders, as far as you can throw one.

Source for above video and text below is *here*.

The nuclear crisis in Japan touched off mass anti-nuclear protests across Europe this weekend. In Germany, some 50,000 protesters formed a 27-mile human chain from Germany’s Neckarwestheim nuclear power plant to the city of Stuttgart. German Chancellor Angela Merkel recently announced plans to extend the life of 17 German nuclear plants for an average 12 extra years. A large anti-nuclear protest was also held in France. Eva Joly is French member of the European Parliament.


Eva Joly: "The idea that it’s dangerous and that we can cope with it, that is finished today. And we know how to get out of the nuclear plants we need renewable energies, we need wind mills, we need geothermy and we need solar energy."

See all headlines for this show

Posted by Julian Real at 1:11 PM No comments:

After 9.0 Earthquake in Japan, Electricity is being parsed out and shut down for hours on end. Water from tap is not safe to drink in Tokyo, report says. Details here.

Officials in protective gear check for signs of radiation on children who are from the evacuation area near the Fukushima Daini nuclear plant in Koriyama, on Saturday, following an explosion and radiation leakage at Tokyo Electric Power Co’s (TEPCO) Fukushima Daiichi nuclear power plant.

*          *           *
The situation in Japan is going from disaster to more dire to worse. Destruction due to the earthquake is followed by many more quakes, called "tremors" or aftershocks. The ground is shaking. People must get down on the floor or ground to keep from falling.

The nuclear meltdowns are a nightmare come true. Volcanic eruption in southern Japan. And now news that the faucet water is not considered safe to drink, while store shelves are empty in Toyko.

Relief workers and able-bodied people from other parts of Japan are heading into radioactive areas to help distribute much needed resources being shipped in.

Pray and do what you can to help out. Prayer won't be enough.

Eat various forms of seaweed if exposed to radioactivity. Eat seven flat sheets of nori (used for sushi rolls) per day per person. Dry or prepared. And other forms of seaweed, with miso. See *this post* for more.


DENVER - Japan's prime minister says the country is facing its most severe challenge since World War II after a deadly earthquake and tsunami devastated the country last week.


Colorado native Charles Pribyl is a college professor currently living in Japan. He's been living in Funibashe, a city just east of Tokyo, for 23 years.

He says the bad news just keeps pouring in.

"It seems like its going to get worse before it becomes better. Everybody is really worried about radiation," Pribyl said.

To add to the problems, the failed reactor was responsible for 25 percent of the city's electricity.

"The problem now is that they announced the rolling blackout that will be for about one month, and depending on where you live it, could be up to 3 three hours," Pribyl said.

He also says they were just told their water is unsafe to drink.

"They're trying to find the source of the contamination, but for now, they're saying drink bottled water," he said.

Pribyl says that, in itself, could be a problem. He says food, water and gas were already hard to find.

He says in most of the country, the shaking created by aftershocks has yet to subside.

"We are still having earthquakes about every 20-30 minutes now, and they're ranging in magnitude between 3 and 6," Pribyl said.

The devastation is really starting to set it according to Pribyl.

"Most people are still in shock. They never thought it would really happen," he said.

If you want to help, donations can be made to several different Japanese tsunami and earthquake relief funds. More information can be found here: How people can help the Japanese earthquake recovery.

Posted by Julian Real at 3:39 AM No comments: