Rosa Parks, by Bill Farnsworth, from the book, Heroes for Civil Rights, by David A. Adler.

Since late last year I've been contemplated how to put together a series of posts throughout this month, honoring great Black women.

This was my preliminary list of several African American women. I'll note here that I tried to avoid using Wikipedia, as it has a poor reputation when it comes to keeping accurate information up about some feminists, but alas, it proved helpful.

After doing more research I was so fortunate to find this amazing page which is from one of the blogs on my blogroll, Diary of An Anxious Black Woman. There you will find information about some of the women listed above.

This is her introduction, from one year ago yesterday:

Today is the first of February, thus beginning what is recognized as "Black History Month," the shortest month of the year. While on my blog, I do black history month every month, I thought I would nonetheless highlight different individuals in history, with a feminist twist. I remember a few Black History months back how angered I was when A&E, for example, once promised to highlight black historical figures in their Biography series for the month of February; as it turned out, they only highlighted one black historical figure each week (and not for the entire month as promised - and don't tell me you can't find 20 black historical figures, if this were based on a M-F schedule, to highlight just for one month!), and the only woman they included in the mix was Sally Hemings, whom they admitted they didn't really know much about because there weren't enough historical records to document her life story; her life story, as it turned out, was only tied to the number of children she may have had with President Thomas Jefferson, which is why she was remembered in the first place!

I was so angry at the way black women's history in particular was marginalized and erased (and don't get me started with other channels, like History, for example - although TCM once surprised me one fine Black History Month when they highlighted various silent films by Oscar Micheaux) that I would like to use my blog to focus on some worthwhile black women from whom we have so much to learn.

Last month, I already highlighted the historic turn presented by Shirley Chisholm, the first black woman to run for president of the United States (this is worth remembering when we vote on Super Tuesday for a "history-making" candidate). However, my next post (perhaps later today) will highlight the life of my absolute favorite black female historical figure ever (wonder if you can guess who she is?). And, yes, I will prove that each day I can find some worthy black female historical figure to write about. That is the challenge I present before you.

When I think about these and so many other great Black women, I think of the term: "righteous outrage". When I think of an outrageous woman, I think of Flo Kennedy, so I'll close here with a classic image of her. This image inspires me to keep on giving the dominant culture the finger. -- Julian 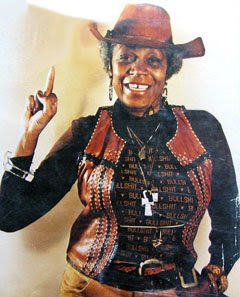