Audre Lorde: Podcast on Survival, for all the sisters who struggle with cancer and other forces challenging Black women's lives

What follows is from *here*, and is a cross-post from Eternal Summer of the Black Feminist Mind.

February 18, 2010
On this day 97 years ago…my grandfather Jeremiah Gumbs was born.  Pop-pop was the person who taught me how a love for poetry could transform my life.   It seems not mere coincidence that my favorite poet and chosen ancestor Audre Lorde was ALSO born on this day 76 years ago!  This podcast, lovingly released on this birthday of two of my beloved ancestors who make their spirits known in my life on a daily basis is also dedicated to a new ancestor.

My godmother Aunt Andie (Andria Hall) died from breast cancer a little over a year and a month ago today. To honor Aunt Andie and Audre Lorde, and June Jordan, and my stepsister Kyla’s mom Diane and Mama Nayo Barbara Watkins and so many more beautiful ancestors who are so powerfully with us, my mom, my Aunti Akosua and the brilliant and inspiring Mary Anne Adams who is a breast cancer survivor collaborated on this podcast.  May it be healing for you and may it be an invitation to the energy of all of your ancestors to fill your heart and kiss your face.


http://brokenbeautiful.files.wordpress.com/2010/02/audre-lorde-survival-podcast.mp3
you can also find the recent podcast on itunes if you search “brokenbeautiful press”

And if you are in or near Durham don’t forget to come to the B-day Party this Saturday!!!!!! [image is from here]
Audre Lorde, for over twenty-five years, has been a primary spiritual teacher in my life, a guide, role model, and exemplar of radical feminist being and practice. Her 66th birthday was on February 18th.

What follows next is from *here*.

Know Your History[Herstory-- changed by Julian]: Audre LordeLGBT, NewsBites, Society & Culture — By Brooke Murphy on February 22, 2010 at 8:00 am

Lorde’s poetry was published very regularly during the 1960s — in Langston Hughes’s 1962 New Negro Poets, USA; in several foreign anthologies; and in black literary magazines. During this time, she was politically active in civil rights, anti-war, and feminist movements. Her first volume of poetry, The First Cities (1968), was published by the Poet’s Press and edited by Diane di Prima, a former classmate and friend from Hunter College High School. Dudley Randall, a poet and critic, asserted in his review of the book that Lorde “does not wave a black flag, but her blackness is there, implicit, in the bone.”

Her second volume, Cables to Rage (1970), which was mainly written during her tenure at Tougaloo College in Mississippi, addresses themes of love, betrayal, childbirth and the complexities of raising children. It is particularly noteworthy for the poem “Martha”, in which Lorde poetically confirms her homosexuality: “[W]e shall love each other here if ever at all.”

Later books continued her political aims in lesbian and gay rights, and feminism. In 1980, together with Barbara Smith and Cherríe Moraga, she co-founded Kitchen Table: Women of Color Press, the first U.S. publisher for women of colour. Lorde was State Poet of New York from 1991 to 1992.

Lorde criticised feminists of the 1960s, from the National Organization for Women to Betty Friedan’s The Feminine Mystique, for focusing on the particular experiences and values of white middle-class women. Her writings are based on the “theory of difference”, the idea that the binary opposition between men and women is overly simplistic: although feminists have found it necessary to present the illusion of a solid, unified whole, the category of women itself is full of subdivisions.

Lorde identified issues of class, race, age, gender and even health — this last was added as she battled cancer in her later years — as being fundamental to the female experience. She argued that, although the gender difference has received all the focus, these other differences are also essential and must be recognised and addressed. “Lorde”, it is written, “puts her emphasis on the authenticity of experience. She wants her difference acknowledged but not judged; she does not want to be subsumed into the one general category of ‘woman’”.[8] In a period during which the women’s movement was associated with white middle-class women, Lorde campaigned for a feminist movement conscious of both race and class.

While acknowledging that the differences between women are wide and varied, most of Lorde’s works are concerned with two subsets which concerned her primarily — race and sexuality. She observes that black women’s experiences are different from those of white women, and that, because the experience of the white woman is considered normative, the black woman’s experiences are marginalised; similarly, the experiences of the lesbian (and, in particular, the black lesbian) are considered aberrational, not in keeping with the true heart of the feminist movement. Although they are not considered normative, Lorde argues that these experiences are nevertheless valid and feminine.

Lorde stunned white feminists with her claim that racism, sexism and homophobia were linked, all coming from the failure to recognise or inability to tolerate difference. To allow these differences to continue to function as dividers, she believed, would be to replicate the oppression of women: as long as society continues to function in binaries, with a mandatory greater and lesser, Normative and Other, women will never be free.

Audre Lorde, a self-described “black, lesbian, mother, warrior, poet,” remains a celebrated figure in our community for her contributions to gay culture through her published works and activism.

Lorde’s body of work includes The First Cities, Cables to Rage, From A Land Where Other People Live, Coal, The Black Unicorn, Zami: A Spelling of My Name, Sister Outsider, and A Burst of Light.
In the 80s, she co-founded Kitchen Table: Women of Color Press, the first publishing company run solely by women and was also a founding member of Sisters in Support of Sisters in South Africa (S.I.S.S.A.), which spoke out on concerns of women under apartheid.

She lived out the rest of her years with partner Gloria Joseph, while battling breast cancer, which eventually took her life in 1992 at the age of 58.

Posted by Julian Real at 3:03 PM No comments:

[photograph is from here, at the Nuclear-Free News website]
This is an excerpt from an interview with Charmaine White Face. The full interview is linked to below.


I recently read and appreciated your article, "Getting to the Understanding", which explains the 7 subgroups of the Great Sioux Nation. I admit that I had been confused, even though (thanks to my grandfather) I was taught, as a child, some facts about different tribes.  Many non-Natives think Indians are all alike. Do you find that even some Native people are ignorant about other tribes, their practices, and particular concerns?

CWF:  Oh yes. There are many factors involved including the adoption of Native children out of their Tribes, the colonizing influence of the educational systems, and of course the historic 'boarding schools' where Native children were brutally treated to 'wipe out' their Indianness. These have had generational effects but slowly and in small numbers, the trend is gradually reversing.

Let us celebrate the life and support the on-going work of Charmaine White Face (Oglala Tetuwan Oceti Sakowin) whose non-Anglo name is Zumila Wobaga. What follows is from *here*.

e White Face
She is a voice for the Black Hills—and it’s a task Charmaine White Face has gladly undertaken for more than two decades, as a columnist for several newspapers and an activist. She formed Defenders of the Black Hills in 2002, working to end logging, mining and exploitative tourism of this area, which is sacred to her Ogala Sioux tribe. Her work has received international recognition, and she hopes that will help return the Black Hills to its rightful owners—the American Indians.
Posted by brendanorrell@gmail.com at 8:07 PM

Posted by Julian Real at 1:27 AM No comments: 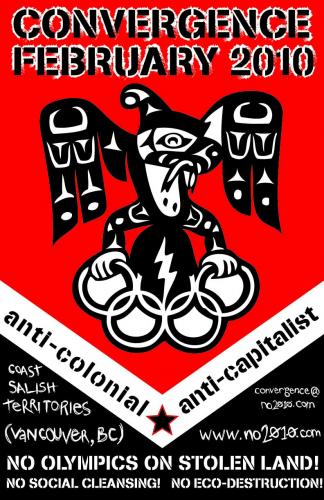 With thanks to Brenda, at Censored News, *here*:

As part of the Anti-Olympics Convergence in Vancouver B.C., members of Coast Salish Katzie First Nation and supporters blocked the Golden Ears Bridge.

The Bridge spans the Frazer River between Pitt Meadows and Langley, and is adjacent to Katzie 1 and Katzie 2 Reserves. It is about a half hour drive outside of Vancouver.

The bridge opened on June 16, 2009. It is owned by Translink, who say, “It will have major long-term impacts on the region, improving travel times and promoting economic activity.” It is clearly disregarding the negative impacts on Indigenous people.

Construction of the bridge desecrated a 3,000 year old burial ground. Its massive pilings in the river disrupt currents, and the ability of local Katzie fishers to fish. Situated at the mouth of the Frazer River, the bridge effects already threatened habitat for Salmon and Indigenous fishing communities all up the Fraser River.

Statement by a participant in the action:

“My people have been told when to fish and how big our net can be since our book of rules (Indian act) in 1896. My family has been arrested for fishing when they were not allowed.”

“That bridge has caused hurt and pain with me and my family. The bridge is built on my peoples sacred burial grounds. That bridge has destroyed the river far beyond Katzie’s boundaries. Because of the bridge I’m forced to change my teachings and ways of fishing. That bridge has destroyed the natural path for the salmon to continue up the river for indigenous people to eat to survive. Dredging gravel out of the river to build bridges and highways for the Olympics is destroying the delicate ecosystem and putting declining fish stocks at further risk.”

These people worked on the site where the bridge is now built. They asked to be anonymous because they would lose their jobs:

“We dug up history of our ancestors - human remains, arrow heads and beads. They gave us a choice: Either we dig up our peoples history or they were going to send non-native people to do it. We were forced and no options from our community!”

After the remains were found, members of Katzie First Nations people were paid to build tiny coffins and bury the bones where they were found. Many of the workers thought this meant they wouldn’t build the bridge at that spot.

“So many bones were found, in fetal position, and scattered bones were found These are my people; these bones are my grandfathers and grandmothers. After we had a ceremony to bury the bones in small coffins we made, they went ahead and built the bridge anyway right over top of our sacred burial ground.”

Posted by Julian Real at 1:03 AM No comments: