Aboriginal Self-Rule: An Example of How the White Australian Media is Racist and Sexist

I've been aware, in the white, white West, the way white male supremacist media is presenting "the problem of child abuse in Aboriginal communities" (in ALL of them??!) which is reportedly happening among some Aboriginal people in Australia. (How the hell would I know what's going on Down Under, particularly in communities I have no access to--and shouldn't have any access to? But I'm a white U.S.er, so I get to sound off about everything, right? What?! You mean we're not experts on child abuse EVERYWHERE just because we're white and Western? Hmmm. What a concept.)

And let's please divert our eyes and media from the problem of child abuse among whites in Australia! As if we whites are the care-takers of those poor, poor people of color who don't know how to deal with big important matters like child abuse! As if Christian whites haven't been grotesquely abusing Aboriginal and other Indigenous children, globally, for a very long time, with little to no intervention by other whites.

This is EXACTLY the kind of condescending, patronising egregiously racist-misogynist bullshit that I think white/U.S. bloggers and other media dispensers ought to not be involved in, unless it's to support Aboriginal and other Indigenous self-governance and stand against any white intervention into the actions happening in places where we don't belong.

What follows was written by Amy McQuire and was published on March 8, 2009 ECD:

They see the words “child abuse” and they think the type of solutions involved can’t be debated between Aboriginal leaders. And they won’t accept that the media’s darlings, the ones who get to air their frequent quotation, are not always the Aboriginal leaders accepted in Aboriginal communities nation-wide.

It seems a simple concept, but obviously it is not one that is easily understood by the media.

The radio presenter further goes on to question Kim Hill over whether Sue Gordon has the “right to speak”. That misses the point so much that it’s unbelievable.

No one is denying these leaders the right to speak. But they are asking for a format to air differing opinions. The media does not grant this right. If anything, I would like to ask most of the media, whether other Indigenous leaders, like Kim Hill, have the right to speak? Because so often their opinions are undermined, and so often they are silenced in the barrage of copy that only uses a few synonymous Indigenous voices.
END OF POST.
Posted by Julian Real at 5:05 PM 7 comments:

We Interrupt this Commercial Message... A Few Questions for Television News Anchors 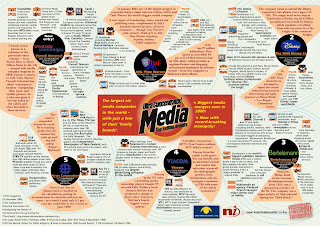 To see this up close and personal, click on the image to enlarge it and also visit this website: http://www.mediachannel.org/ownership/chart.shtml

An open letter to the anchors of corporate U.S. TV news shows:

So when does identifying rape as a form of terrorism and war against women become more important than letting the viewer know who made the greatest fashion faux pas at this year's Oscar Awards show?

When do starving children and adults--disproportionately female, often taken out with lower respiratory infections, HIV/AIDS, malaria, diarrhea, tuberculosis, measles, and whooping cough, get identified, by name--one by one, as also dying directly from U.S. bombings, white Western genocidal policies, Western cultural imperialism, corporate greed and poisoning of the Earth, and military actions we control or condone?

As but one of many among the demographic groups so important to your corporate statisticians who work to sell me your unsustainable, slavery-requiring shit, can you explain to me, exactly, in language I can understand, how the World Bank is NOT, in fact, "Working for a World Free of Poverty"?

When might I program my DVR to tape the series of reports on how the IMF's leaders are lying through their sharpened teeth to announce this bunk about what they really do for a living: "The International Monetary Fund (IMF) is an organization of 185 countries, working to foster global monetary cooperation, secure financial stability, facilitate international trade, promote high employment and sustainable economic growth, and reduce poverty around the world." Why don't you TV morning news show hosts have a really good laugh over that one?

What time may I set my clock alarm to note you permanently halting the gross misuse of graphics and other images portraying men of color as THE MOST DANGEROUS MEN IN THE WORLD and as a category of people who, you remind me constantly, are the most threatening people on Earth to the well-being of white folks? When will you release the reports on the number of men (and women) of color white men have killed, or slaughtered, or taken out through genocide, institutionalised poverty, and other forms of organised mass murder? Could you please compare that figure to the number of white men killed by Black and Latino and Asian men (and women) over the same period of time?

In what time period will you welcome radical feminists of any color on the air without interruption, and without presenting five well-paid, corporate pimp-owned people "to balance out her point of view"?

When will you stop being utterly obsessed with heterosexual celebrity relationships, marriages, affairs, divorces, baby bumps and births? When does the Nadya Suleman saga stop taking up more time in the media than the forced sterilisation and rape of American Indian women by white men?

In what year might we expect you to announce that a woman of color is now the head of any of the top U.S. news networks or conglomerates, and also stop your whining and complaining about how the days of white men being in charge are over because we currently have one Black man as president, following 43 white guys, and no women of any race?

When will you stop equating "America" with "The United States of America"? Venezuela and Canada, Mexico and Brazil, Newfoundland and Nicaragua are also part of "America".

When does around-the-clock coverage begin showing and accurately interpreting what people of conscience among the Indigenous Nations of the Americas have to say out about the on-going genocides against Indigenous Americans from the Inuit of Canada's tundra to the Yamana of Tierra del Fuego--if the Yamana have not already been completely wiped off the Earth? Is Michael Phelps' pot-smoking really more important a news story than that?

When will you call plastic surgeons who do routine breast enlargements, tummy tucks, face and butt lifts, what they actually are: serial butchers who profit from women's poor self-esteem and self-image that is entirely manufactured by your ads and racist/woman-hating industries?

When will you report on the devastating effects to nonhuman life of biocidal practices that comprise the foundation of Western Civilisation? Or is the story of the man who wrestled with a shark for two hours (and won) more important?

When, in other words, will you start telling us the truths that your corporate boards of trustees won't allow you to tell us without firing you?

When will you grow a spine and a conscience, or leave your post out of shame? Or, when will allow people with a conscience and a spine to take over those boardrooms and displace, by any means necessary, the trustees who care more about how many millions they'll make this year than about human and nonhuman life and the health of the planet?

I won't bother asking Rush Limbaugh or Bill O'Reilly as I already know they are so damned heartless that I can't expect a readable pulse from either one of them.

So, I'm waiting for your answers Matt Lauer, John Stossel, and Scott Pelley; Leslie Stahl, Stone Phillips, and Katie Couric; Charles Gibson, Keith Olbermann, and Anderson Cooper. Post your replies here, unless your bosses will fire you for doing so--no, post them even IF your bosses will fire you for doing so; surely you've all raked in enough money and property by now to live out the rest of your very privileged lives.