[photograph of Annie Le, who was murdered by the white man in the photo below, is from the AP]

Men who knew Raymond Clark III (in photo below), the white man arrested for the murder reported to CNN that he was "a nice man, always" and "'not at all' violent". Ah, the patriarchy-protecting Bonds of Brotherhood. And more proof that men who hate and harm women don't run around like lunatics waving old issues of Ms. Magazine. They are nice guys, sweet men, kind, considerate, and fun. (And some of them are also known for being grumpy, disagreeable, overtly controlling bastards.) The point being: they are the men we know, who live everywhere. 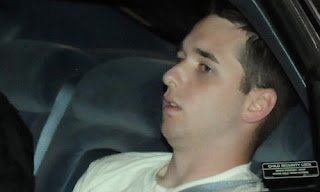 The New York Times' version of the murder of Annie Le is here:
http://www.nytimes.com/2009/09/18/nyregion/18yale.html. From that piece is the following passage:

Chief James Lewis of the New Haven police would not speak about a possible motive, but said, “It is important to note that this is not about urban crime, university crime, domestic crime, but an issue of workplace violence, which is becoming a growing concern around the country.”

The chief sought to dispel any notion that Ms. Le, who was about to be married, had been stalked by Mr. Clark or that Yale itself was unsafe.

Police chief James Lewis is full of CRAP and doesn't have a goddamned clue what the fuck he's talking about. We are not surprised he's risen to be a police chief in a city thick with racism, classism, and misogyny.

Strange, isn't it, how white men's stress seems to get acted out disproportionately against women, given that men work with other men so often. Let's be clear: "a demanding job" has nothing whatsoever to do with why white men kill women of any ethnicity or race. Men kill women because men can kill women and usually get away with it. Men kill women because women are systemically targeted by men for systematic assault and murder. End of story.

I just wish the dominant media would tell it like it is.

One presumes if the jobs in the lab were so demanding, she might just as easily have killed him. Hmmm. But it never works that way, does it? One might also presume the lab conditions might be a tad more stressful on the lab animals than on the white man working there. Too bad the animals themselves didn't take him out before he murdered Annie Le. But again, we know who is allowed to kill whom, in a white male supremacist society that thinks of non-human animals and human women as things for men to exploit, torture, and destroy, with a regularity that ought to strike most people as constituting an atrocity. And, to report all the facts, he was known as "an animal lover" and "a kind man". With lovers and kind men like that...

The white male president of Yale, Richard Levin, was equally politically stupid about this crime, noting:

Yale's president, Richard Levin, said Clark had worked at the university since December 2004, and that nothing in his employment record foreshadowed violence.

"It is very disturbing to think that a university employee might have committed this crime," he said, stressing that the campus and the city are safe.

"What happened here could have happened anywhere," he said. "It says more about the dark side of the human soul than it does about anything else."

"This incident could have happened in any city, in any university, or in any workplace. It says more about the dark side of the human soul than it does about the extent of security measures," Levin said in a message sent to the Yale community.

Nice try, Levin. But this murder says much more about the very white side of masculinist atrocity. The harassment and rape, and now murder, of women on your campus would lead anyone to a different conclusion. It should lead anyone to conclude that Yale University is not a safe place for women to study or work:

Even statistics tell only a partial story of acquaintance rape at universities across America: one-fifth of college women experience forced sex by someone they know, and more than 80 percent of all rapes are acquaintance rapes (according to the National Institutes of Health Study and the US Department of Justice). At Yale, the statistics seem more reassuring at face value. No incidents of rape have been reported to the University Police department so far in 1996. An untold number of incidents are excluded from this statistic, however; they are either handled by Yale's Executive Committee for disciplinary action or simply dropped because of lack of evidence, publicity-wary authorities, or the victim's own shame. "When I talk to women's groups, they cannot believe that the official rape statistics at Yale are so low. They've heard of many more incidents by word of mouth. But people have to realize that acquaintance rape is almost never reported to the police," Yale Police Sergeant Patrick Wrinn said.

Hey, Patrick, break the bonds of The Brotherhood and educate the president of the place where you're employed, as well as the New Haven police chief, about what is really going down there.

My condolences to the friends and family of Annie Le, who lived to be only 24 due to "a co-worker's demanding job". May she rest in peace.

May her murderer rot in hell, ASAP.

[Richard Levin's quote and both images are from the guardian.co.uk article linked to here]

And they say white men don't protect one another's crimes against humanity and non-human life. How much proof do we need? How many more women have to be murdered, at home, at school, and at work, in men's apartments, motel, and hotel rooms, and on the street, before white men, collectively, "get it"?