[photograph of Chandra Talpade Mohanty is from here] 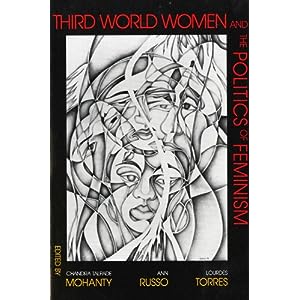 [image of book cover is from here]
This book is almost twenty years old. And nothing has gotten better, collectively, for women of color around the world. And so much has gotten worse.
Daily, it seems, I encounter white resistance to decentering white experience when it comes to being responsible and responsive to radical feminists of color who do and do not live in "the West". Daily, it seems, I encounter men's resistance to decentering adult male experience when it comes to being accountable and active in allegiance and alliance with radical feminists of color anywhere in the world. And for the women of color I know, it never "seems" to be daily: it is daily.

I do not see too much difference between this white resistance to and male dominance over women of color. Both political groups make life so much harder for the people who are the world's majority. My view is shaped by what women of color tell me directly not by what my white male privileged eyes are positioned, structurally in the world, to see. For my perspective, my view, if left to my white brothers to define and describe, would mean that the voices of women of color do not exist at all. My white brothers tell me it is white men's suffering that always matters most, and that no other suffering ought to be compared to it. Because, you see, white men, and to varying degrees, most whites and most men, are understood by white men to be more human than all women of color.

When I encounter this complete lack of responsibility and accountability to women of color, I want to spit in the faces of white men who refuse to give up the ridiculous idea that they are "the" definition, the superior standard, the exemplary example of what it means to be human. I have been turning away from the white men now for years, sometimes quickly and sometimes slowly. And also from the whites and the men who want me to ignore women of color--or to listen to whites and men more carefully, with more compassion for their pain, pretending their pain is qualitatively more important, more urgent, in need of more attention, than the pain of women of color across the globe.

I more carefully listen instead to what women of color have to say. I do this in the hopes that my actions here will be appropriately, humanely responsible and responsive and might also facilitate the cracking and breaking apart of some of the concrete ground of colonialism, corruption, and carnivorous misogyny that is now globalised for the pleasure and profits of white men over and against everyone and everything else. "Everything" here meaning all non-human life on Earth.

The white male Christians have got this quite wrong: the End of Western Civilisation will not release white men to heaven, but will send them directly to hell. And in that fire--molten and deep, their souls will know a kind of suffering they never conceived of while roaming or walking the Earth. To the white men who have refused to conceive of women of color as exemplary human beings by refusing to listen to what responsible, humane women say, I state this: one day you will know to the bone and beyond, what you built a world to avoid experiencing.

I pray that when the time, the End Time, comes, that corrupt, corporatised, incompetent, callous, cruel, contemptuous white wealthy men will die first and that the Earth will belong, for however much time, to the Life that those men seek to destroy and are currently proving successful in destroying.

Given what Indigenous women around the world and other women of color are reporting about what white men's corporations and callous practices are doing, how can anyone conclude that white men ought to be in charge of any institution or industry at all?

“ . . . the book challenges assumptions and pushes historic and geographical boundaries that must be altered if women of all colors are to win the struggles thrust upon us by the ‘new world order’ of the 1990s.” —New Directions for Women

"This surely is a book for anyone trying to comprehend the ways sexism fuels racism in a post-colonial, post-Cold War world that remains dangerous for most women." —Cynthia H. Enloe

" . . . propels third world feminist perspectives from the periphery to the cutting edge of feminist theory in the 1990s." —Aihwa Ong

“ . . . excellent . . . The nondoctrinaire approach to the Third World and to feminism in general is refreshing and compelling.” —World Literature Today

[source: here]
[T]his collection of 15 essays offers examples of current feminist perspectives on race, class and Third World issues, and thoughts on appropriate approaches to these subjects. M. Jacqui Alexander's "Redrafting Morality" examines Trinidad and Togabo's 1986 Sexual Offenses Bill, finding that government has a "major stake in promoting and defending conjugal masculinity" and in subordinating women by recognizing them only as "wives." In "Gender and Islamic Fundamentalism," Nayereh Tohidi notes how the position of Iranian women has deteriorated since 1979--despite their active participation in the uprising against the Shah--and concludes that "the women's question should not be relegated to the days after the revolutionital in text." Russo, in "We Cannot Live Without Our Lives," argues that white feminists should not dismiss racism as "their" problem but "work with women of color as peers . . . which means we must give up sole power and control of feminist organizations, political agendas, and theoretical perspectives."
Posted by Julian Real at 2:51 PM