A Light Bulb Moment: AHA! Men don't want to be called rapists because...* 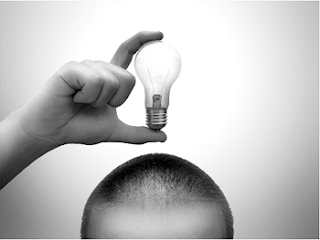 [images above is from here]
*     *     *
TRIGGER WARNING: CLEAR DESCRIPTIONS OF THE CRIMES OF RAPISTS FOLLOW: 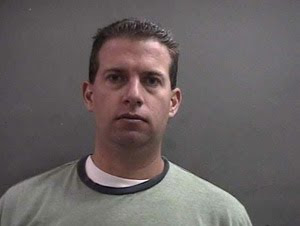 This image of David Alex Park, left, and the paragraph below are from *here*.
Last month, in Irvine, California, Officer David Alex Park, stalker and rapist, was acquitted by a jury of eleven men and one woman. He was acquitted, not because he is anything other than a stalker and a rapist—which he as much as admitted in open court, and which was proven well enough anyway by phone records, license plate requests, and DNA evidence. He was acquitted because he is a cop, and the woman that he harassed and sexually extorted danced at a strip club, and so the jury concluded that she made him do it, and besides, if she strips for a living, she must have been asking for it anyway. 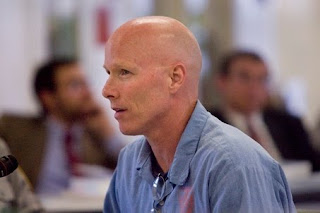 Photo by Ross William Hamilton/The Oregonian
Image above is of the convicted rapist Richard Troy Gillmore at his parole hearing at the Oregon State Correctional Institution in Salem. The article can be found *here*
*     *     *
Thomas Cope, 55, tied up his teenage victim with a computer mouse cord and raped her twice before letting her go after an eight hour ordeal. He was jailed for life after a judge branded him 'a serious danger to women'. 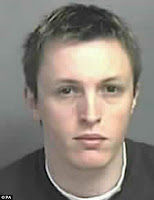 Image to the right, of spyhole rapist Anthony Batchelor who was jailed indefinitely, is from *here*

A rapist who secretly filmed women and children for eight years was snared when his neighbours discovered a tiny spyhole had been drilled in their ceiling. Voyeur Anthony Batchelor, 33,  who had been filming his neighbour's partner sunbathing naked, was caught out after a coin-shaped hole was discovered in the roof.
When police searched Batchelor's home in Gloucester, they they scoured his computer and discovered damning footage he had filmed just before he raped a young woman at knifepoint and threatened her with red-hot hair tongs.

Officers also found videos where he had 'zoomed in' on women and children changing at swimming pools as well as clips of him setting up a spy camera by his lavatory to film four women. Jailing Batchelor indefinitely for public protection at Gloucester Crown Court, Judge Mark Horton told the father-of-one his unlimited sentence reflected the 'sexual depravity' he put his victims through.


*Because we ARE rapists/sexual violators/agents of sexual assault. We molest, we incest, we force our desires onto others against their will. We force others to think our will is theirs, so we no longer have to use so much force. We do this: men do this.

How simple. How utterly obvious.

And how self-servingly and aggressively defensive men get about this.

Men traffick children and women. 20 million people worldwide are estimated to be trafficked, largely by men and always FOR men's pleasure. FOR MEN'S PLEASURE, and for men's abusive, vile power over others. Men enslave children and women. Men rape and batter their female spouses and girlfriends. Men do all of this and when anyone says so, the defensive pricks fight back with "You're a man-hater!!!" "You're overgeneralising!!!" "Not ALL men do that!!!"

I now have a weapon of argument I never had before. And it is a simple one. To any man who has been sexually active with women or girls: PROVE TO ME YOU ARE NOT A RAPIST. PROVE IT. Because all the men I know who have said they are not, when I find out what they have done that they call "fully consensual sex", reveals that, in fact, they have raped, they have violated, they have abused girls and women. And these men refuse to name their behavior that way. They refuse to name it this way so that they can continue to do it again and again and never think they are being a serial rapist--to one girl, to one woman, or to many.

Given that force, dominance, coercion, subordination, humiliation, degradation, violation, violation, violation are ALL turned into steamy hot, desired heterosexist sex by pimps, pornographers, and rapists, it is not surprising men are up in arms about this truthful accusation. They/we don't want to name ourselves this way. We don't want to know what we do. We don't wish to be responsible for our brothers. We want our entitlements and privileges, our power and our rights, left alone, in tact, undisturbed by those feminist voices who say "NO! STOP IT!"

And any man with an ounce of humanity, when hearing anyone say "men are rapists" would do one of two things.

1. Say "Yes, we are", "yes, men do rape women", "yes, men are rapists and we won't admit it", and
2. Let me reflect with honesty and compassion for women on all I have done sexually, to find the memories where I was coercive, dominating, forceful, humiliating, selfish, self-centered, oblivious to her needs, lost in my own fantasies played out on and against her body, etc. Let me make myself more humane by doing this personal-political inventory, rather than snap back "NOT ALL MEN ARE RAPISTS!!!"

To any men who try and defend men who are rapists, I will say to you this: the only men I have ever known who get deeply upset, defensive, agitated, obnoxious, aggressive, hostile, and antifeminist about feminists stating this obvious truth is men who have committed rape and won't own up to it. And so you guys deflect by trying to make the declarer of the truth seem insane for stating a truth that resides somewhere in your own soul. And it works, too often. But not now it doesn't. Not here on this blog.

What would a man w/ an ounce of humanity/inkling of common sense/faint notion of what it means to be a decent person NOT say in such a situation?

“SOME WOMEN RAPE, TOO”

“DON’T PAINT US ALL WITH A BROAD BRUSH!”

Another addendum:
What follows is also posted below as a comment, but I wanted it located here in the body of the post as well. It was written by karinova:

For any naysayers, I just wanted to contribute a resource to back up this point:
“[W]hat they call ‘fully consensual sex,’ reveals that, in fact, they have raped, they have violated, they have abused girls and women. And these men refuse to name their behavior that way.”

This is supported in spades by the work of Drs. David Lisak & Paul Miller. (Sadly, and to my utter unsurprise, it’s kind of obscure.) In short, they surveyed men asking if they’d committed rapes/attempted rapes/battery/etc. of women (and children). Normally, men would of course say no. But the surveys didn’t call it rape/violence; instead, they asked about specific acts. [eg: “Have you ever had oral sex with an adult when they didn’t want to because you used or threatened to use physical force (twisting their arm, holding them down, etc.) if they didn't cooperate?”] It’s mind-blowingly obvious, but indeed, as it turns out, when it's not labeled rape, men self-report like crazy.

Now, I’ve seen estimates that say 1 in 60 men will do something like this in their lifetime. And the bleakest thing about the L&M data (to me, anyway) is the incredible volume of violence this kind of man can do: “One sample of 122 undetected rapists admitted to 386 rapes, 20 other acts of sexual assault... 264 acts of battery against intimate partners... 365 acts of sexual abuse against children... and 91 acts of physical abuse against children.” Yes, all by just these 122 doodz. And there's lots more. Apparently, this is just what they think normal relationships are like. (Wonder where they got that idea?!)

They don’t understand that it’s rape/abuse. And a lot of other people don’t either. This has to be a big part of why they don't get caught. The entire System— which is controlled by men, and controls the image of rape/abuse— fails to define/recognize them as rapists/abuser. Men need to get on this, ASAP.