Harriet Harman: Can a feminist politician get respect... and become the Prime Minister of the UK? 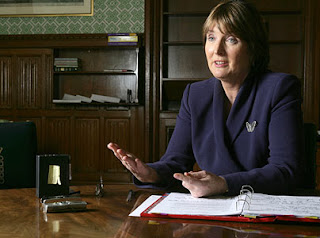 This is an excerpt from the second link below:

Harman has attracted this deluge of ridicule and vitriol because she was deemed to have used her time in charge to promote a "bonkers" feminist agenda. Really? It's worth taking a moment or two to consider what she has done to deserve this. One piece of man-hating madness, in the eyes of her detractors, is that she wants a review of the rape laws to improve conviction rates. But that doesn't seem bonkers at all when you consider that of all the rapes reported from 2007 to 2008, only 6.5% resulted in a conviction, compared with 34% of criminal cases overall, and that the government estimates that as many as 95% of rapes are never reported to the police in the first place.

Cases of women falsely alleging rape appear in the newspapers – and such behaviour is appalling – but the far greater problem is the culture of disbelief faced by genuine victims. A report two years ago found that many police officers dealing with rape victims had "very little training" and that women experienced delays, insensitive questioning and judgmental or disbelieving attitudes. Unsurprisingly, between half and two-thirds of cases did not proceed, with most deciding to withdraw their complaints. These findings emanate from two notorious feminist hotbeds, Her Majesty's Chief Inspectorate and Her Majesty's Crown Prosecution Service Inspectorate.

What follows was sent to me by a colleague and friend, Christina, also working diligently to publicise and challenge white hetero male supremacy. I am so glad to know her!

Thanks, Christina, for keeping me aware of so much that I miss in the media and elsewhere.

Christina's writing follows:
In the UK we have Harriet Harman who has some great ideas of getting white men out of power. Unfortunately she is surrounded by white males who challenge all her ideas and prevent these ideas from becoming law.

Not to mention how the British media which is completely controlled by straight white males goes out of its way to make her look like an idiot and that all her pro female ideas are ludicrous. And of course white males are the real victims.

See this link to the Daily Mail as an example of how the white male media are pulling her apart:

The UK is one of the most sexist and racist countries in the world and it will stay that way until the hetero white males are removed from power and only then can laws that are pro female and pro other groups start been past.

In addition to exposing white cocks for what they are (especially MRAs, Fathers Rights, Hollywood, etc.), we should also be encouraging fellow feminists’ to send e-mails of support to people like Harriet Harman showing her that there are a lot of people out there who fully support her.

Lets not forget that the MRAs and Fathers Rights groups target her in a big way and often get their supporters to send her e-mails telling her how stupid she is. Well, she should also be receiving e-mails from feminists telling her how much they support her.

I am sure you have Harriet Harman equivalents in the US who could also do with a bit of support.

And soon afterwards I got this from Christina:

I am extremely happy to say that I finally managed to find an article (obviously written by a woman) that is pro Harriet Harman.
See link:

I have never battled so much to find an article like this. (But you just have to google her name to find articles that slam her.)

I think it would be great if she became Prime Minister of the UK.