"White Men as The Problem" by Joe R. Feagin 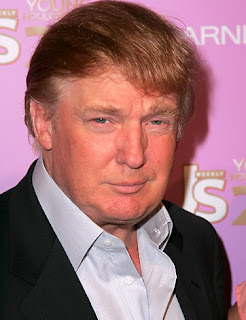 [above image of Donald Trump is from here] 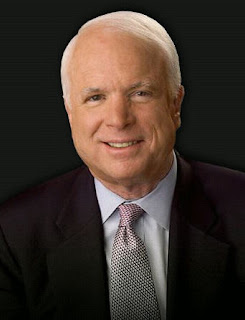 [above image of John McCain is from here]

What follows is just a portion of a post from racism review. I greatly recommend going to the source and reading the whole piece.

[All the text that follows was posted by a man named Joe R. Feagin. A bit more info on the two men who contribute to the site follows the excerpted piece*:]

Unusual numbers of photos of elite white men are in the news lately, since the financial crisis hit. Almost all perpetrators of our “second great depression,” as with the first, have been white men. White male business “geniuses,” often with top-college educations. It is odd that no one yet, to my knowledge, has featured the whiteness or white-maleness of these malefactors of great wealth as a central feature of the life-devastating economic “problem” we face globally. One can be sure that if these agents of destruction were women or men of color that the reality of their gender and racial characteristics would be a constant topic of conversation by pundits and politicians, especially in the media. (Remember that Hillary Clinton is still blamed for failures in health care reform quite a while back.)

Come to think of it, white men (they named themselves “white” in the 17th century) created the modern Western (now world) economic system. They created the Protestant Ethic and the Spirit of Capitalism. Or should we say, the Predatory Ethic and the Spirit of Exploitation. Arrogant greed seems to be a major motivation behind the labor/land expropriation and exploitation euphemized by historians as “overseas exploration” and “settlement.” Certainly, white men created, expanded, and maintained the often genocidal taking of millions of indigenous peoples’ lands in the Americas and the Holocaust-like Atlantic slave trade. Mostly white men created the oppressive realities of modern capitalism and North American slavery, and have made huge profits and wealth off of it, now passed along to their descendants.

In recent centuries, elite white men have caused much death and destruction, probably more than any other elite group on the planet. White men are certainly not the only major sources of “democide” and related despotism, but they do seem to lead the list. (Consider not only the many indigenous genocides and Atlantic slave trade, but the Holocaust, Soviet gulags, Hiroshima and Nagasaki, two world wars). While white men are not alone in such actions, the consequences of their actions have been more far-reaching, especially for the planet in general than have those of despotic not-white actors.

White men set up the Western legal systems reinforcing modern capitalism and North American genocide targeting millions of indigenous Americans and enslavement of millions of African Americans. They created the white racial frame to explain and rationalize these savage operations. The white frame is a dominant worldview that a great many white men, including elite political-economic leaders, still seem to be operating out of as they today exploit the world’s majority, the 80 percent of the planet that is not white.

And it was these self-named white men who reinvigorated a very strong white-patriarchal frame, with its “great chain of being” notions (God at top, then angels, then European men, then European women, then European children, then “other races,” then animals). In the North American case, they easily extended this to the system of racial oppression they had devised for Native Americans and African Americans.

These men, centuries ago and now, see themselves as heroic and virtuous, even as they have created great destruction and misery for many people. Ronald Takaki speaks of this view of white men as “virtuous republicans.” Note that in this centuries-old process most white men have had little sense of their own weakness and venality, but have almost always accented their virtues. Today, as in earlier centuries, most white men generally do not see their group’s lack of virtues, their major weaknesses, and their major errors. They certainly do not like to admit error. Indeed, white men now often blame the victims, as in the case of this white male commodity trader who recently blamed homeowners and moaned about “losers” with troubled mortgages, and not the banks now being bailed out with billions for playing the central role in creating the housing crisis.

So we are rapidly moving today to the second of their “great depressions” in this country’s history, yet the arrogant framing and actions of a few hundred, or perhaps thousand, of elite white men have yet to be problematized. Indeed, one cannot do so in the public media and discussions of this society. It simply is not possible to problematize the ruling group, as they have too much control to allow for significant problematization.

*about us
Posted by admin on Sep 10th, 2007
2007
Sep 10
Contributors to RacismReview are scholars and researchers from sociology and a number of other social science disciplines and a variety of academic institutions across the U.S.
RacismReview is intended to provide a credible and reliable source of information for journalists, students and members of the general public who are seeking solid evidence-based research and analysis of “race,” racism, ethnicity, and immigration issues, especially as they undergird and shape U.S. society within a global setting.We also provide substantive research and analysis on local, national, and global resistance to racial and ethnic oppression, including the many types of antiracist activism.
Launched in 2007, RacismReview is produced and maintained by Joe R. Feagin, Texas A&M University and Jessie Daniels, CUNY- Hunter College.]
END OF POST.
Posted by Julian Real at 5:30 PM