U.S. Christian Homophobe and Anti-Gay Rights Activist, George Alan Rekers went on a subsidised vacation to Europe. Here's a couple of pics of the young white man he paid to have along with him "to assist with heavy lifting". The fuckin' hypocrite can't even LIE straight. 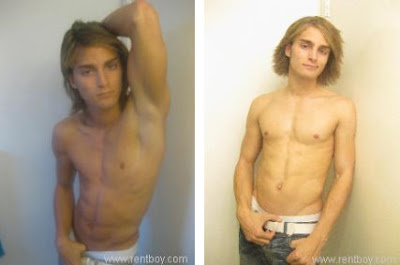 [The images above are of the young man Rekers procured. They are from here at the blog Joe.My.God.]
What follows is a cross post from Towleroad: a Site with Homosexual Tendencies, *here*.

George Alan Rekers, a founding member of the Family Research Council with James Dobson and Amandi Nicholi Jr., was caught returning home from a European vacation in mid-April with a young man he hired on rentboy.com, the Miami New Times reports: "On April 13, the "rent boy" (whom we'll call Lucien) arrived at Miami International Airport on Iberian Airlines Flight 6123, after a ten-day, fully subsidized trip to Europe. He was soon followed out of customs by an old man with an atavistic mustache and a desperate blond comb-over, pushing an overburdened baggage cart.

That man was George Alan Rekers, of North Miami — the callboy's client and, as it happens, one of America's most prominent anti-gay activists. Rekers, a Baptist minister who is a leading scholar for the Christian right, left the terminal with his gay escort, looking a bit discomfited when a picture of the two was snapped with a hot-pink digital camera.

Reached by New Times before a trip to Bermuda, Rekers said he learned Lucien was a prostitute only midway through their vacation. "I had surgery," Rekers said, "and I can't lift luggage. That's why I hired him." (Though medical problems didn't stop him from pushing the tottering baggage cart through MIA.

Yet Rekers wouldn't deny he met his slender, blond escort at Rentboy.com — which features homepage images of men in bondage and grainy videos of crotch-rubbing twinks — and Lucien confirmed it.

The paper adds:
"Rekers is a board member of the National Association for Research & Therapy of Homosexuality (NARTH), an organization that systematically attempts to turn gay people straight. And the Huffington Post recently singled out Rekers as a member of the American College of Pediatricians — an official-sounding outfit in Gainesville that purveys lurid, youth-directed literature accusing gays of en masse coprophilia. (In an email, the college's Lisa Hawkins wrote, 'ACPeds feels privileged to have a scholar of Dr. Rekers' stature affiliated with our organization. I am sure you will find Prof. Rekers to be an immaculate clinician/scholar, and a warm human being.') Rekers lectures worldwide, from Europe to the Middle East, on teen sexuality. Yet during his ten-day sojourn with Lucien to London and Madrid, he had no lectures scheduled. Both men deny having sex on the trip, and emails exchanged between the two before their jaunt are cautiously worded."

More background info on Rekers at Truth Wins Out...

UPDATE: Rekers responds to Joe Jervis on Facebook.
[See below for details, also from the Joe.My.God. blog:]

Dr. George Rekers, Patron Of Male Prostitutes, Responds To Me On Facebook

NARTH and Family Research Council co-founder Dr. George Rekers has responded to my inquiry about where to find the hottest male prostitutes. After the above, he continues:


I have spent much time as a mental health professional and as a Christian minister helping and lovingly caring for people identifying themselves as “gay.” My hero is Jesus Christ who loves even the culturally despised people, including sexual sinners and prostitutes. Like Jesus Christ, I deliberately spend time with sinners with the loving goal to try to help them. Mark 2:16-17 reads, “16When the teachers of the law who were Pharisees saw him eating with the "sinners" and tax collectors, they asked his disciples: "Why does he eat with tax collectors and 'sinners'?" 17On hearing this, Jesus said to them, "It is not the healthy who need a doctor, but the sick. I have not come to call the righteous, but sinners." In fact, in a dialogue with hypocritical religious leaders, Jesus even stated to them, "I tell you the truth, the tax collectors and the prostitutes are entering the kingdom of God ahead of you. 32For John came to you to show you the way of righteousness, and you did not believe him, but the tax collectors and the prostitutes did. And even after you saw this, you did not repent and believe him. " (Matthew 21:31).

Like John the Baptist and Jesus, I have a loving Christian ministry to homosexuals and prostitutes in which I share the Good News of Jesus Christ with them (see I Corinthians 6:8-11). Contrary to false gossip, innuendo, and slander about me, I do not in any way “hate” homosexuals, but I seek to lovingly share two types of messages to them, as I did with the young man called “Lucien” in the news story: [1] It is possible to cease homosexual practices to avoid the unacceptable health risks associated with that behavior, and [2] the most important decision one can make is to establish a relationship with God for all eternity by trusting in Jesus Christ’s sacrifice on the cross for the forgiveness of your sins, including homosexual sins. If you talk with my travel assistant that the story called “Lucien,” you will find I spent a great deal of time sharing scientific information on the desirability of abandoning homosexual intercourse, and I shared the Gospel of Jesus Christ with him in great detail.

Oh, well that explains EVERYTHING! Dr. George Rekers is curing homosexuals ONE BY ONE by hiring them on MALE PROSTITUTION websites! Glory! Praise His Name!

UPDATE: Let's call Reker's bluff and talk to "Lucien." I know at least ONE of you knows him and has contact details. Spill it! Or was there enough information in the Miami New Times story to figure out who he is on Rentboy.com? Unsurprisingly, Rekers thinks this is a bad idea.

UPDATE II: With the help of a JMG reader, I believe we have found "Lucien." I just left him a lengthy voicemail requesting an interview and begging him to come forward with his story for the good of his fellow gays.

[Julian's note: I've deleted some of this because I find it to be demeaning to "Lucien". Joe has a really despicable attitude about people in the humans-for-sale industries, it seems.]